With seven drownings in the first weeks of Israel’s beach season, two Australian immigrant brothers have a plan for keeping people safe in the sea.

This is the summer that Danny and Paul Hakim are introducing the Nippers, the famed Australian safe-swimming network. The Hakims decided to bring the wildly successful concept, created 50 years ago to help kids and adults learn how to swim safely, to Israel, where drownings have become an unfortunate reality every summer.

Guarding the beaches is an impossible task for Israeli lifeguards, said Danny Hakim.

“How many people can three pairs of eyes watch over?” he said. “Nippers create extra eyes and awareness and kids learn what to do.”

The Nippers program is being launched through the Israel Life Saving Federation at beaches in Herzliya, Tel Aviv and Haifa and plans to extend it into a national network over the next few years. For now, this summer’s pilot program will include weekly classes for kids age 7-12, teens and adults in all three locations.

“We’ve always dreamed of this sort of thing happening,” said Paul Hakim, an educator and tour guide who’s lived in Israel for 35 years and is president of the federation. He’s also a licensed Nipper educator, having taken the course during a trip back to Australia several years ago.

He noted that the program continues the tradition of Australian ties with Israel and the Mediterranean Sea. 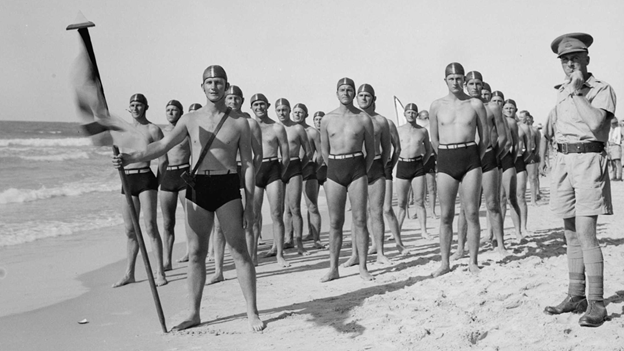 Australia has a long history on Mediterranean beaches, including during World War II, when Australian soldiers trained in Mandate Palestine and hung out at the beach (Courtesy Israel Life Saving Federation)

The Nippers program started in Australia in 1967, teaching kids as young as four years about waves and how to identify the dangers of the sea. There are 10,000 beaches in Australia, and most of the population lives near the coast.

Now more than 67,000 kids a year take part in the Nippers program Down Under, said Danny Hakim, making it the largest youth movement in the country. It’s also spread around the globe, with program offshoots in 100 countries.

The Israel Life Saving Federation is endorsed and trained by the Australian Lifesaving Association. With six trained instructors on board, it’s hoping to sign up 100 kids this summer.

They’re also planning on pairing the Nippers program with surfing schools over the Sukkot holiday vacation in the fall, and hoping to bring Nippers into the school system to create a new generation of Israeli kids who are knowledgeable about the water.

While Australian-born parents may be the vanguard in this summer’s pilot program, the Hakims are hoping to wrangle other populations into the mix, including the Arab community.

One of the Nipper-trained teachers is Arab and will teach water safety in the Arab coastal town Jisr az-Zarqa, as the program grows.

Anna Hecht, who moved to Israel from Australia 12 years ago, got involved because she wanted her three kids to be safe in the water, after she grew up with surf awareness. 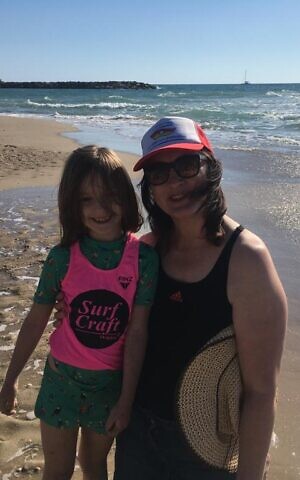 “The undercurrents in the sea here are nothing like we have in Australia, they’re far stronger,” she said, “and this program taught my kids how to handle the sea.”

One of the added benefits of the Nippers program is that parents have to get involved, even though many are surprised by that.

“You get to spend three hours with your kids without a phone,” said Hecht. “It’s hard work, but everyone loves it.”

For Paul Hakim, the local lack of beach safety is one of the things he’s had a hard time accepting in his years in Israel. Drownings can be prevented by teaching people how to swim with the current, he said.

“It has to be fun and cool,” said Paul Hakim. “To be a Nipper is the coolest thing you can be in Australia because you’re a lifesaver. In Israel, we understand life and death at a very young age and people volunteer here for all different reasons. This is just another reason.”

Have a feel-good story to share for our The Brighter Side series of articles? Email Jessica Steinberg at [email protected]

$3 million to make sport and recreation more accessible in South…