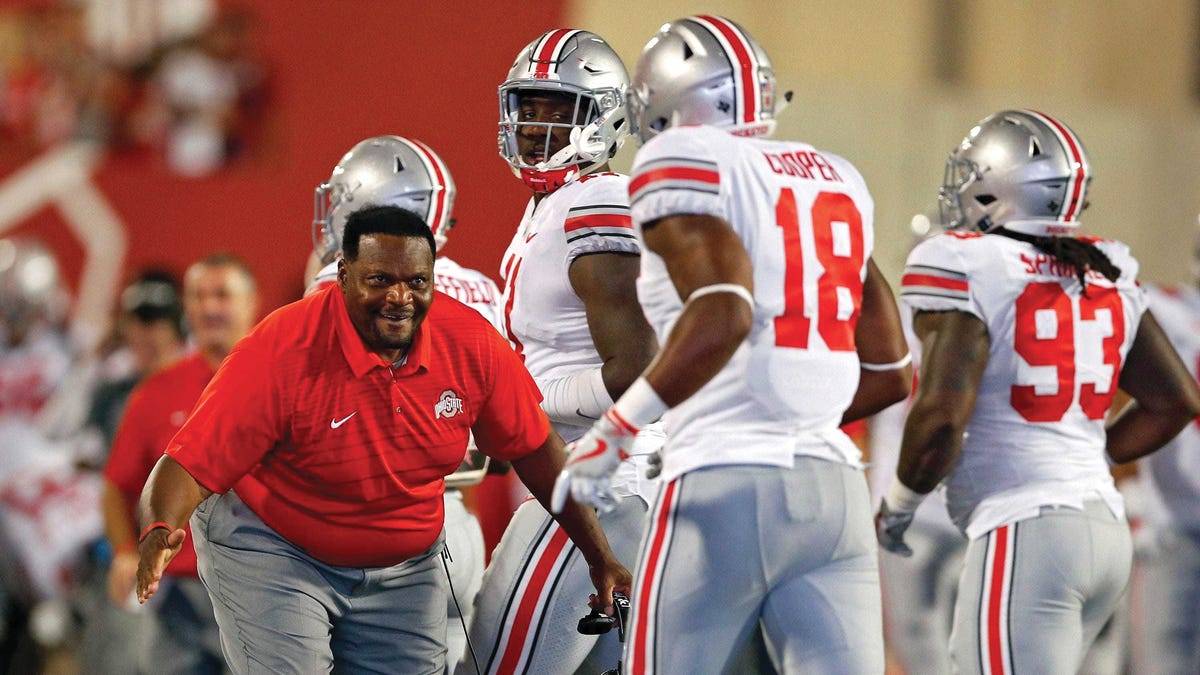 The defensive line guru is an elite assistant, and for one fleeting moment, he had the top spot on the Buckeyes coaching staff.

Of the many college football recruiters Jalyn Holmes encountered during high school, a well-dressed defensive line coach made the most significant impression. “He wore a suit the first time I met him,” Holmes says about Larry Johnson, a Penn State assistant at the time, in 2013. “I’ve never seen an assistant coach do that, just head coaches. He carried himself like a head coach.”

Holmes, now a defensive lineman with the Minnesota Vikings, would eventually commit to Ohio State but ended up working with Johnson anyway, after Urban Meyer hired him as the Buckeyes’ defensive line coach in 2014. Holmes’ initial perception was prescient—after 25 years as a collegiate assistant, on Dec. 5, 2020, Johnson roamed the sidelines as a head coach for the first time when a positive coronavirus test forced Ryan Day into quarantine.

Johnson’s brief stint at the top illuminated a larger problem: Black head coaches remain a rarity in college football. Only 12 of 130 Football Bowl Subdivision programs have Black head coaches, down from a high of 17 in 2011, despite roughly half the players being Black. Coincidentally, Johnson’s debut came against another Black coach, Michigan State’s Mel Tucker, and Johnson noted the symbolism of two Black coaches shaking hands on the field.

“The biggest issue most of us have is getting an opportunity,” Johnson says. “There are a lot of great Black coaches doing a great job, and the toughest thing is when they fail or their programs don’t see change quickly, and they don’t get another shot. I root for them every day because their success gives a chance for the next guy to move forward.”

Johnson thought he too had a shot at becoming a head coach because of his lengthy tenure at Penn State, but he chooses not to dwell on what could have been. In his 18 years there, six of his defensive linemen were first-round NFL draft selections. When he left after a leadership change, the prospect of replicating his success at OSU proved too appealing to turn down.

He values the relationships he builds with players and credits his late father, Herman, for the pride he takes in his work. Johnson has also shared stories with the Buckeyes about growing up in segregated rural North Carolina in the ’50s and how it shaped his drive to succeed. He credits Meyer and Day for being open to his perspective on issues about race, including the Black Lives Matter demonstrations last summer and Colin Kaepernick’s decision to kneel during the national anthem.

And Johnson was right about finding success at OSU. Just ask NFL first-round draft picks Joey Bosa, Nick Bosa and Chase Young, all of whom were named Defensive Rookies of the Year. And Holmes, a less-heralded recruit who became close friends with his coach as he developed into an NFL-caliber player.

Meanwhile, Johnson’s at peace with his current position. “I’m comfortable with who I am, and I don’t need a head coach title to show who I am. It’s been about being the best D-line coach in the country and making sure my players have opportunities to succeed.”

The NCAA Demographics Database, which was published in March 2021 and includes information through the 2019–20 season, shows that 56 percent of Division 1 student athletes are white, but white coaches hold 80 percent of the top jobs. Meanwhile, Black students account for 21 percent of athletes, but only 13 percent of head coaches are Black. Though demographics vary among the Power Five conferences, head coaches skew whiter than athletes by at least 18 percent in all of them, and Black coaches are underrepresented at the highest level.

In terms of progress, a recent analysis of the Big Ten by the Minneapolis Star Tribune found that eight of the conference’s 14 universities had more people of color as head coaches in 2021 than they did in 2017. Ohio State, one of those eight, was tied for fifth in racial diversity. The OSU athletic department reports that it has four head coaches of color out of 31 sports, about 13 percent.

Above, statistics from the NCAA Demographics Database show the percentage of white and Black head coaches in each Power Five conference. —Chris Gaitten and Marlie Griffith