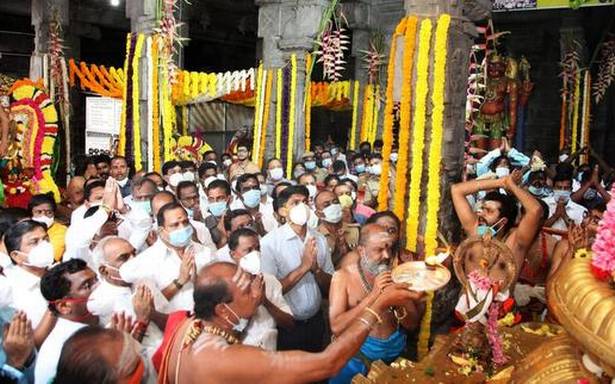 The Karthigai Deepam festival has begun in Tiruvannamalai with the flag hoisting on Friday morning, marking the first day of the two-week long festivities. For outsiders, there have been restrictions placed on entering the town on November 28 and 29.

On November 29, the Bharani Deepam will be lit at 4 a.m. and at 6 p.m., the Karthigai Deepam will be lit on top of the hill. “Every year it is held as a grand event and lakhs of people take part in the event, but this time the event will be low-scale due to the COVID-19 pandemic. All the festivities will be conducted inside the temple premises,” said R. Gnanasekhar, Temple Joint Commissioner, HR&CE.

He said that during the 14 days of festivals, devotees will not be allowed inside the temple on November 29 alone. “On other days only 5,000 people, with e-passes obtained from www.arunachaleswarartemple.tnhrce.in, will allowed inside the temple. All Standard Operating Procedures will be followed. We have also made toilet facilities at the exit for devotees,” he added.

Collector Sandeep Nanduri inspected arrangements inside the temple premises on Friday afternoon. “He checked if all the SOPs are being followed. This year, the float festival will be conducted in Brahma Theertham and he inspected the tank too. This year there will be no festivities on the street,” said an official.