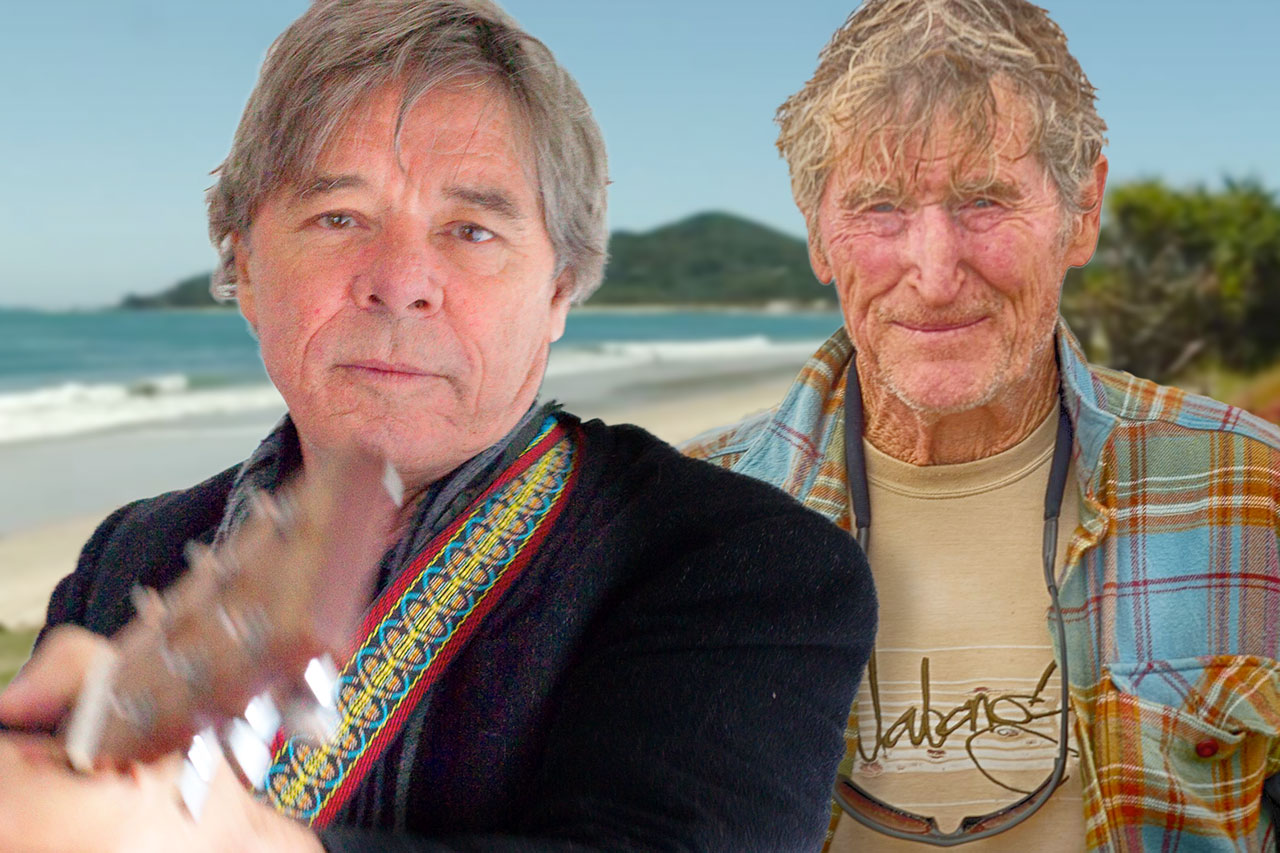 Barry Ferrier and Rusty Miller play at The Rails this Sunday.

Forty years ago, musician Barry Ferrier rolled into Byron Bay. It was an idyllic place – with surfie bohemian types rubbing shoulders with the old school locals. Barry has been an integral part of a growing, thriving, and always-changing music and arts scene here. It all started when he teamed up with blues harp blower, and surfing legend, Rusty Miller. Barry spoke with The Echo about the early days, ahead of his nostalgic reappearance with Rusty, at the Rails, on Sunday.

What brought you to the area? Can you describe what it felt like then? Who was here, what was the vibe?

I had been living a crazy schedule in Sydney in the 70s, performing in Jesus Christ Superstar, Joseph & The Amazing Technicolour Dreamcoat, recording a single for RCA, an album for Alberts Music, appearing on Countdown, and supporting Ry Cooder at the Palais in Melbourne. I caught a train up to Mullumbimby for a Christmas holiday away, needing a break from the rigours of the Sydney music scene. At a NYE dance at Durrumbul Hall I met the members of a brilliant early north coast funk/rock trio, The Feelers, including virtuoso American guitarist Michael Barnes (who had come to Australia with the Nutwood Rug Band). After chatting and finding out about each other, they offered me a position in the band and a room in the musician Greg Lyon’s old farmhouse at Possum Creek. I just loved the natural beauty of the region and decided to move up here to refresh myself and to spend some time writing some new music. I’m still on that holiday 40 years later!

So how did you come to be playing at the Rails as Soft Surfing? Did you do surf numbers?

Tom Mooney had just taken over the lease at the Railway Friendly Bar, then just a tiny little bar on the Railway Station where a few old-timers used to sit. Rusty built the first section of the awning, which now covers the stage at the Rails, and I believe it was Rusty who suggested to Tom to trial putting on some music. Rusty asked me to play the debut music gig in late January 1981, and he accompanied me on congas and harmonica. We played there every weekend for a few months and pretty soon there were enthusiastic crowds coming down to bop, and the new venue never looked back. We did many gigs together after that, playing the first gig at Brunswick Pub, and also the Byron Bay Markets in the park near the Surf Club. Rusty had been US surfing champion, but though he had named us Soft Surfing, we didn’t actually play any surf music, [we played] an eclectic set of originals and covers including Tom Waits’ songs and the hits of the early 80s (though we didn’t have the big hair to go with the repertoire!). Rusty always did a cameo with the Willie Nelson song On the Road Again.

What do you think is so special about The Rails?

It is a wonderful, and probably unique credit, to have hosted live music seven nights a week for 40 years, with COVID-19 being the only thing to halt the fun. Many artists gained experience from gigging at the Rails. John Butler got his start there. The relaxed, down-to-earth atmosphere and excellent food have made it part of Byron Bay’s unique identity.

What were the happening places back then?

For many years in the 80s there was only one nightclub in Byron Bay, which was called the Brasserie and it was situated in the corner of the old Woolies car park, now known as Woody’s Surf Shack. It would open when the pubs closed, at 11pm. Most weekends I would play at either the old Surfside Hotel (now the Beach Hotel), the Great Northern, or the Rails, pack up and then go on to play a second spot at the Brasserie where my duo or trio was the resident band. There used to be a queue to get in that stretched up to Jonson Street and ‘round the corner, and we would take the door price of $3. We would rage on until three or four in the morning.

What is it about Byron do you think that has this endless attraction for newcomers?

Byron Bay itself is always, firstly, one of the most beautiful beaches in the world, with great surf. The early Byron surf culture was very attractive – simple, idealistic, nature-loving and carefree. The hinterlands have such a wow factor for natural unspoilt scenic beauty. The music scene began to mature and venues like the Arts Factory (now the Brewery – I played the opening gig there too) and the early Blues Fest (which I’ve played five times) were established in Byron Bay. There was also the emergence of the counter-culture movement, inspired by the Aquarius Festival in Nimbin. Byron Bay gradually developed a reputation for its relaxed lifestyle, great culture, food, and natural beauty. Some people also have a sense that there is a ‘spirit’ to this special meeting place. So many people, like me, come here for a holiday and never leave.

Tell me about you and Rusty getting together 40 years since your first gig at The Rails… how have the rehearsals been going?

Rusty and I have been friends for 40 years, and way back when we were young bucks, my dad and I helped lay his kitchen floor. We’ve had a few reunion gigs over the years, and I maintained his website for a few years, so we’ve always had a great friendship. It will be nice to acknowledge this shared time.

What should we expect for your upcoming reunion gig at the rails?

We’ll have a bit of fun playing some of my favourites, and Rusty will provide the rhythmic feel and some great blues harp. On the Road Again will certainly feature.

Barry Ferrier is joined by Rusty Miller at the Rails on Sunday. Free.