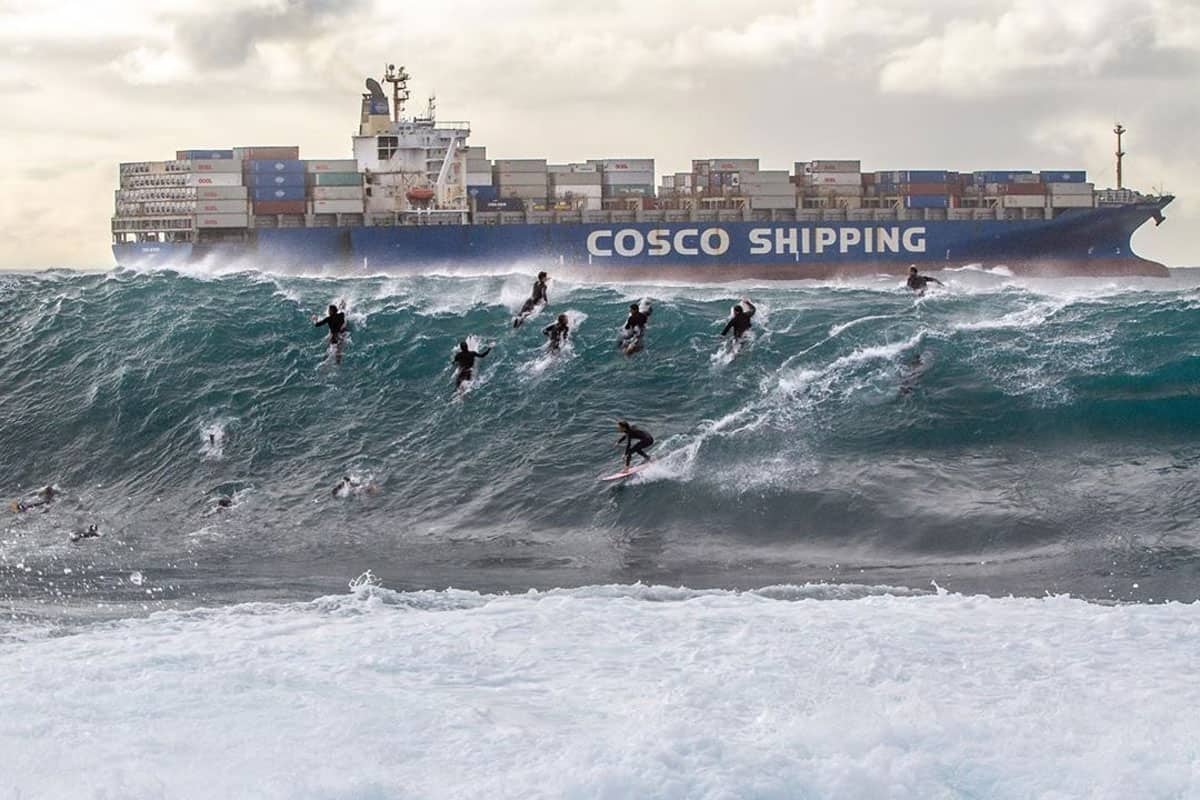 Then there’s Cape Solander – a Sydney slab dubbed Cape Fear by Redbull, Ours by the Bra Boys and Pikers Hole by the first individuals to ride it back in the ’60s.

Located around the corner from Sydney’s Botany Bay, Solander is arguably Australia’s scariest wave, and became Australia’s most controversial surf spot in the 2000s when the Bra Boys violently staked it as their own, resulting in a number of high profile confrontations (and jiu-jitsu holds).

While there are bigger waves in Australia (see: The Right, Shipsterns Bluff), none are as shallow, localised or as close to dry rock.

Though these days the localism has calmed a little, there’s still a tension in the water every time there’s a swell, and the oysters are still suture-sharp.

What happens when you meet them?

Professional big wave surfer Mark Mathews once told Redbull, “I’ve had so many times where I’ve taken the first wave of the set and nosedived on the takeoff – enough times to know that when that happens, you’re going to be driven straight into the ‘surgeon’s table’.”

“We call it that because it’s a flat bed of reef that’s straight in front of the take-off. Oh, and it also covered in barnacles.”

“Chances are you’ll break a bone on impact, but if you’re one of the lucky ones, then you’ll just have some serious slices to deal with. Then, when you’re bruised and bleeding body finally gets to the surface, you’ll look up and see what’s coming – about four more monsters with 4-foot thick lips coming straight at you.”

“They literally impale you onto the cliff face. It’s not fun, to say the least. If you’re out at Ours when it’s heavy, you better make that drop…”

These words in mind, I rocked up to Solander at 7am yesterday, to enjoy the remnants of what has been one of the best runs of swell Sydney has had in years.

Taking yet more Redbull advice (see: ‘so, you really want to surf cape fear?‘), it wasn’t an ‘obvious’ swell, with the forecast showing dubious winds and dropping 3-5ft waves.

After missing the entry, entering the car park via the one-way exit, and half expecting a national park ranger (or an angry mob of Bra Boys) to be coming out the other way, I pulled up to an almost empty dirt lot and a three wave set.

There were three people in the water, but no takers.

There was also no wax because – of course there was no wax.

My friend and I suited up and walked over, trying to look as though we’d been there a million times. This proved difficult as we had no idea where to jump off, and were both sporting Channel Islands surfboards.

As far as the locals were concerned, we were either pros or kooks. An image we were hoping would be enough to get us one decent wave before it all became clear.

We jumped down three barnacle-covered steps and into the grey-green water.

Paddling through clumps of foam I tried not to think about the Great White that was spotted the other day, or about Botany Bay being a breeding ground for bull sharks.

As it tends to go, my first wave was my best. The current kept pulling people deeper, and as I sat wide, I lucked into an unridden, mid-sized one. Problem was, I paddled in at the steepest point.

I soon found myself backwards, upside down, bouncing on rocks.

I eventually got back on my board, with a river of water pulling me towards the cliff and another wave approaching. I duck dived, got pushed even closer to the rocks, then sprint paddled to the channel as the current loosened. That remained my best wave.

The rest of the session was a lesson in frustration. I saw twenty or so perfect waves, maybe five horrendous wipeouts, and realised unless you’re willing to throw yourself over the edge of what looks a hopeless cause, you’re not going to get barrelled.

I also discovered to get a good wave you have to sit deep, which is impossible to do without committing yourself to a trip to the cliff if you mess it up.

It’s also hard to do without getting in the way.

Considering my first wave, which I caught from a wide position, gave me a scare with the rocks, and considering I was trying not to draw attention to myself in the lineup, sitting properly deep proved tricky.

So: I picked up scraps, fell on every one, saw a seal and decided to get out of there.

Then came my chance.

A set, bigger than any all morning, came. The main guys whistled, but no one turned.

“One for the Onboarders!” one yelled.

Onboard being a surf store that sells Channel Island surfboards, I thought he was f*cking with us.

Fortunately, I didn’t have the courage to go anyway, the thing closed out all along the cliff, and a bodyboarder popped out from the end of it.

The subconscious is cruel.

I did the paddle of shame with my mate, and then we hung around in the shark zone trying to figure out where to get back onto the rocks.

We spent about 10 minutes like this, waiting for the right size swell to lift us on, before a 16-year-old kid arrived, looked at us with mild (deserved) disdain and ‘rocked on’ in two seconds.

If that’s not surfing in Sydney I don’t know what is.

Top Ways to Easily Practice the Game of Golf – SWAAY