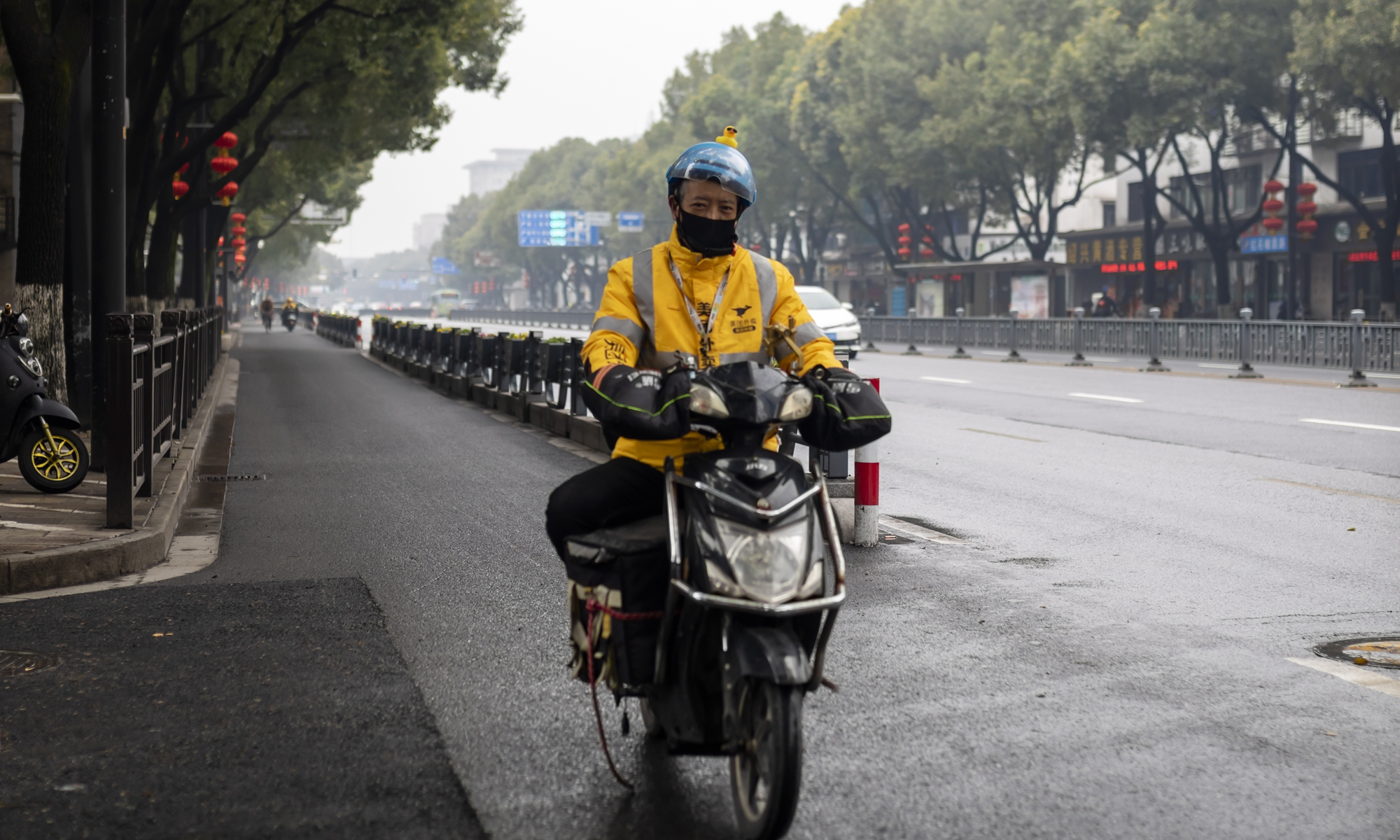 A total of 48 million people in 36 major Chinese cities chose to stay at the places where they live and work during this year’s weeklong Spring Festival holiday, normally a peak time for migrant workers to return home for family reunions, heeding the call of the government to prevent a possible winter spike in coronavirus cases.

As people stayed put, the need for food and e-commerce deliveries soared, resulting in the courier workers who stayed becoming one of the busiest groups during the festive season.

Tao Mingqi, a 21-year-old from Fushun city, Northeast China’s Liaoning Province, is one of the hundreds of thousands of delivery workers who chose to stay put to handle the exploding number of parcels during the Chinese Lunar New Year holidy for the second year in a row.

There were so many parcels at the Yunda Express outlet in the Jinzhan neighborhood of Beijing that he didn’t have a single day’s rest during the holiday.

“During the busiest time, I would generally get up at around 5:30 am to start unloading and sorting parcels, and would wrap up a day’s work by 9 pm,” Tao told the Global Times on Friday, noting that he has recently delivered around 250 parcels each day, up 100 compared with the last Spring Festival holiday.

As people across the country were encouraged to stay in place over the long holiday break to avoid a sudden flare-up in COVID-19 cases, some changes have taken place for the parcels Tao handled.

“I will save the money to prepare for my marriage in the future. As a young and energetic man, it’s better to work hard and save now,” Tao said.

The call to stay put from localities during the 2021 Spring Festival has led to delivery demands soaring nationwide, with 660 million parcels being collected and delivered either by post or by express couriers from February 11 to 17, up 260 percent on a yearly basis, data from China’s State Post Bureau showed last Thursday.

In central China, parcel collections surged by 359 percent year-on-year, while deliveries rose by 260 percent, the fastest growth among all regions across the country. Parcel deliveries and collections also surged 300 percent from one year prior in localities such as South China’s Guangdong Province and East China’s Zhejiang Province.

As many logistics companies worked uninterrupted during the Spring Festival holiday, many in-home service industries did the same.

Her employer, free of the worries that Zhang may not return in time due to the coronavirus control measures put in place, was also glad that she chose to stay. Last year, because of Beijing’s quarantine requirements, it took Zhang one-and-a-half months to return to the household where she works.

Zhang told the Global Times over the weekend that many childcare and home support workers she knew made the same choice as she did, primarily due to the pandemic situation.

To maintain the bond with her family in Northwest China’s Gansu Province, they arranged calls via an online video connection.

“I don’t see them for much of the year, and in a way this makes my absence during the Spring Festival holiday less unusual,” Zhang said.

Warmth of the Spring Festival

Despite the differences, the warmth of the Spring Festival was still felt by people who chose to stay at their work places.

Yunda Express’ Tao said he had the regret of a delayed reunion with his parents when he was busy during the festival, and when he heard utterings like “returning to the hometown”, tears will well up in his eyes.

“When I told my parents that I couldn’t get back home for the festival, I could feel their sense of loss, though they tried to hide their feelings,” he said, noting that he plans to take two or three days leave to visit his parents after the Spring Festival peak season.

A February 17 report by chinanews.com described the story of Wang Dongdong, a delivery man working for e-commerce platform JD.com Inc.

Wang said his working station had kept most chefs on duty as well, with him and his fellow colleagues able to have hot meals no matter how late they return, as a soaring workload has easily extended working hours to 17 to 18 hours a day during the busy festival time.

“Above all, I was quite touched and felt happy when one of my customers ordered a meal specially for me, in the wee hours after a backbreaking day, a rather unexpected gift for the Lunar New Year,” Wang said, noting that occurrences like this make him feel his work is highly meaningful.