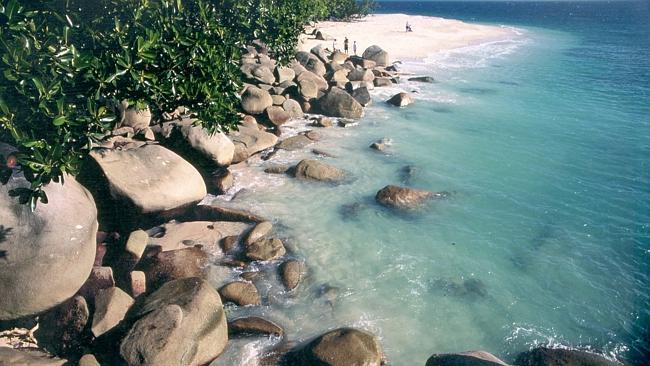 NUDITY is no longer welcome on the Great Barrier Reef’s unofficial nudist beach.

Fitzroy Island’s Nudey Beach, off Cairns, is now a no-go zone for those who fancy a tropical “nakation”.

“Let’s be honest,” Fitzroy Island owner Doug Gamble said. “Not a lot of nudists are the Greek gods or goddesses they imagine themselves to be.”

The Australian Nudists Association and Free Beaches Australia have long claimed Nudey Beach as a popular destination to go starkers.

One of far north Queensland’s most famous beaches, it is listed in the state’s top five unofficial “clothing optional” beaches.

Queensland is the only state without a legal nude beach.

But Mr Gamble, a millionaire developer who bought the island in 2010, told The Sunday Mail he had officially declared Nudey Beach “out of bounds” to bare buffs.

“This is a resort for couples and young kids,” he said.

“I’m not very open to nudists taking over a family-friendly beach.”

Those who dared to down the daks ran the gauntlet of electric shock or a spud gun attack, he joked.

Mr Gamble said Fitzroy Island was named by Royal Navy Captain James Cook on his voyage in HMS Endeavour in 1788.

Concerned Nudists, in a statement to The Sunday Mail, said Queensland was lagging behind the rest of the world in “not having clothing-optional beaches at which nudism, semi nudism or topless is allowed”.

“Nudism is one of the fastest-growing leisure activities with over 55 million people in the USA and 15 million in Europe,” it said.

“With no sniggering remarks you’d find the majority of nudist people enjoy the lifestyle for the health reasons and not the sexual reasons that get portrayed.”

“However liberated, wild and free they might make you feel, nudist beaches aren’t really the place to practice Bikram poses or to pole dance on the lifeguard’s chair,” she said.

Free Beaches Australia plans to mount a legal challenge to “Public Nuisance” charges against a member for nude bathing on Bribie Island in Queensland last month.

“This incident occurred at a remote beach, where there was no one else around apart from the local police on the hunt for nudists,” FBA said.