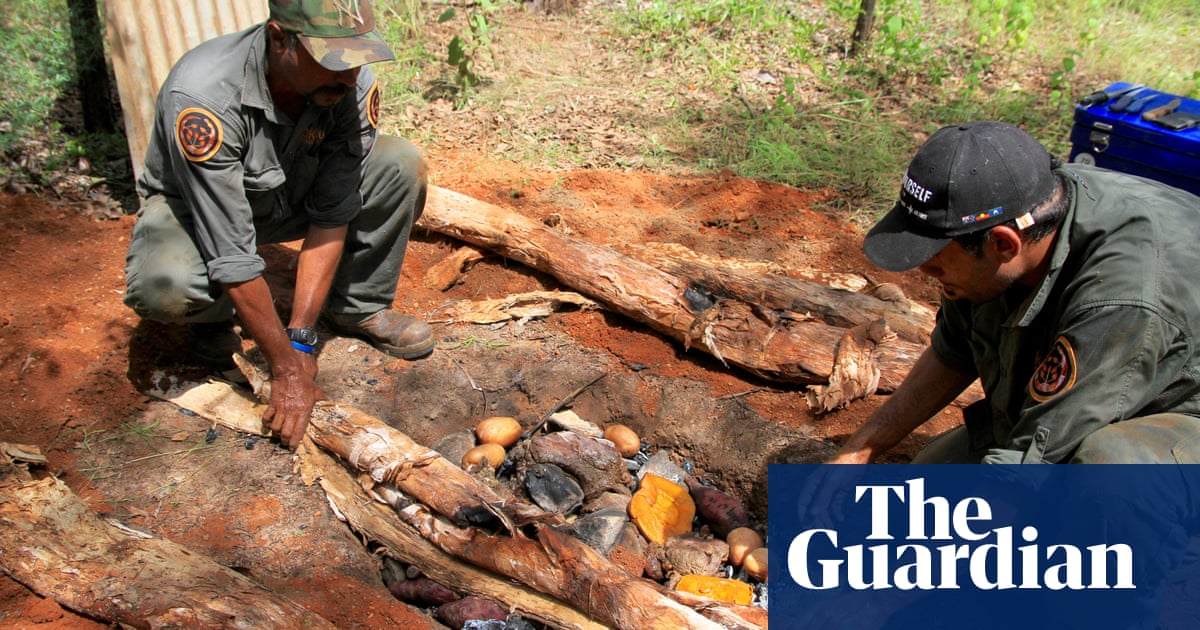 Mandy Muir and Patsy Raiclar, both Bininj women, are walking us around the outskirts of the Warradjan cultural centre in the Kakadu national park for a lesson on bush tucker.

Muir pulls down a branch and points out a nest of green ants, teeming inside a cocoon of leaves. She abruptly smashes the cocoon between her hands and offers the carnage to the startled group.

“You can eat one if you want but it’s still wriggling around a bit,” Muir says, taking a bite of one and jumping. “It bit me on the lip!”

We gingerly pick up some definitely dead green ants from her hand and, as directed, bite the bums. The tangy, citrus-like flavour is pretty tasty if you close your eyes.

Our unconventional tour is part of the preview to A Taste of Kakadu, the festival celebrating Indigenous food, culture and heritage.

We travel through gu-warddehwardde (stone country in Gundjeihmi language), gu-ngarre (monsoon forest), gabbal (floodplains) and an-behbeberrk (savannah woodlands), getting a taste of what the May festival will serve up.

We walk and climb and fly and learn – and eat. We taste smoked kangaroo, pickled crocodile, emu pate, buffalo slow-cooked in a ground oven, roadkill emu, black bream and barramundi. We pick green ants from branches. And those are just the meats.

The Kakadu plum, we’re told again and again, has the highest concentration of vitamin C in the world, and the gundurn berries are spread across warm damper in a thick, tart jam. Cheeky yams are soaked in a dilly bag in a stream overnight to wash away toxins and can make a pretty good hummus (we’re told).

You’re not supposed to visit Kakadu outside of the dry season, or so a lot of people think. Roads are flooded, the air is thick and sticky, and rampant crocodiles and buffalos have made the few accessible swimming holes and paths off limits.

But for those who live here, it’s a favourite time. The country is singing, bursting with life and drama, and – importantly – food.

While the abiding reputation of the park is dramatic scenery, dangerous wildlife and Crocodile Dundee-style shenanigans, the festival seeks to introduce visitors to another side of it – the side that has sustained people for up to 80,000 years.

A Taste of Kakadu is in its second year, and will offer a vastly expanded program from 18 to 27 May, teaming the traditional owners of the land with renowned chefs and practitioners of Indigenous food.

Cultural events, pop-up dining and masterclasses in cooking and bush tucker will be scattered across the park’s spectacular sites, including canapé cruises on the stunning Yellow Water billabong, ground oven feasts, mystery tours and language lessons with Muir, who is also a tourism operator and executive.

It’s surprisingly easy for tourists to visit Kakadu and never learn that even after centuries of colonial injustices and dispossession, many Bininj still live here on their traditional lands, their connection to country uninterrupted for millennia.

Bradford, whose mother is a traditional owner of Kakadu, says she and Tyler hope to showcase the life of Indigenous communities for the visitors, “because people are very hidden from that”.

“If you came to Kakadu you’d only see where the tours are running, which is absolutely stunning, but not the real heart and soul of us,” she says.

“It really opens their eyes to the way we live in community – even the poverty – and the facilities we have. It’s a beautiful eye-opener. And they can taste the traditional foods and forage and learn why we only forage at that particular time of year, or why we’re not picking that food, or why Benny can eat something but I can’t.”

Bradford and Tyler grew up in the park, in the Indigenous community of Patonga. Their passion for the foods they grew up with, and the experimental culinary fusions they can make, drive our menu over the three days and will form one of the festival’s activities.

“Kakadu Kitchen is out in the bush. It’s fishing, hunting , it’s a 65,000-year-old kitchen,” says Tyler. “The families are going out together getting the bush tucker. The families are cooking it together.”

Tyler and Bradford are cooking up a demonstration lunch, using a lot of ingredients we’d foraged for with Muir and Raiclar. They’re helped by Green, a Gunditjmara and Palawa man.

Green notes that Indigenous ingredients are “having a bit of a moment” right now, but he’d like restaurants to aim higher – sourcing the ingredients from traditional areas and embracing the seasonal availability of them.

Indigenous people in the Top End follow six seasons, and we are here during kudjewk, the monsoon time of flooding water and strong winds. The festival will take advantage of yekke’s cooler temperatures and north-north-east winds signalling the start of the dry.

The trio serve up a black bream fish caught out the back of Patonga and stuffed with native lemongrass from near Nourlangie rock and gundurn berries picked by Raiclar. It’s wrapped in paperbark and pandanus leaves, and thrown on coals to cook.

The following day we feast on a shoulder of meat from a buffalo weighing more than half a tonne that’s been cooking in a ground oven since 5am. A fire at the bottom of a pit is burned to coals, heating a bundle of large stones. The meat goes on top, covered by more hot rocks and then thick layers of paperbark and dirt.

It’s simple enough but “they can be easily stuffed up”, says ranger Freddy Hunter. “You can’t lift the lid to see how it’s cooking.”

By midday, as the dirt is dug away and the paperbark rolled back, the pungent smell confirms it’s ready and the meat melts at first bite.

It’s a time of transition for Kakadu, as the main economic driver for those who live here – the Ranger uranium mine – is closing.

Tourism is the main push, but the challenge is getting people in all year round (something this festival hopes to encourage), and increasing traditional owner involvement. While Parks Australia is spending big on infrastructure upgrades, there are still hangovers of the Croc Dundee heyday, which jar with today’s improved awareness of the area’s Indigenous roots.

“The beauty of A Taste of Kakadu is that they’re bringing different traditional owners from different areas of the park. They’re not just using your standard [Kakadu activities],” says Bradford.

The festival is providing employment and training as the old mine-related opportunities ebb away. Locals are optimistic and many see the mine closure as a catalyst for discussion about their future and a time to take chances.

“The associations in Kakadu are all bonding together to see how we can assist these micro businesses or even established businesses who might be struggling a bit.”

Disrupting the disruptors: how Covid-19 will shake up Airbnb | Technology

Will the University That Survives Have Been Worth Saving? – The Chronicle of Higher Education

WATCH: Australian stars in a campaign for the Sydney Film Festival via M&C Saatchi