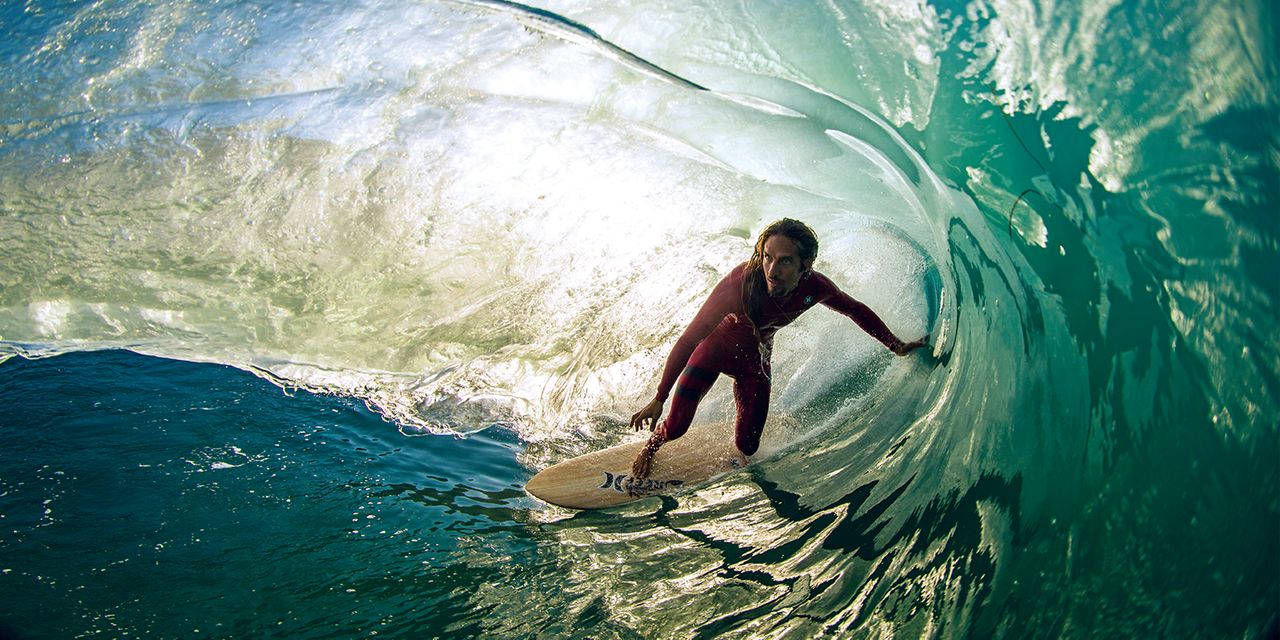 
When he was a young man, Mark Price, the bespectacled South African CEO of Firewire, an eco-friendly surfboard maker based in Southern California, lived much of his life out of a suitcase, traveling the world chasing waves. From an early age, surfing had been a major passion. “There’s a constant debate whether surfing is a sport or an art. I think it’s a feeling and everyone wants to feel a little bit different,” he says.

Leaving his homeland to avoid military service, Price funded his international travels through surfing competitions. “It was incredibly valuable, but at the same time I felt a little homeless,” he says.

Since coming onboard to Firewire in 2006 from Reef, the flip-flop maker, after years of experience in the adventure sports space, Price has helped grow the company from a small boutique into one of the world’s top-three largest surfboard makers. At the same time, Price has pushed the company in a greener direction, transforming their supply chain into a less-toxic, more carbon-neutral production.

Though Price had not worked in the surf industry before, he knew lots about it from his own experience as a pro. He had also met Nev Hyman, Firewire’s founder, in the early ’80s, when Hyman built him a board when Price was competing in Australia (Hyman has since left Firewire and now builds sustainable houses).

When Price joined the company, most of the surfing industry’s energy was devoted to refining and experimenting with the shape of boards, which had improved dramatically since the sport’s early days (a new surfing exhibit at Honolulu’s Bishop Museum features 19th-century boards that are tens of feet long). Brands were using the same materials used for 40 years. “But materials are where you can really change the game,” Price says.

Traditionally, modern surfboards have been made with a combination of polyester resin and polyurethane foam, referred to collectively as PE/PU. Both are highly toxic. Firewire instead uses bio-epoxy resin and polystyrene, “the combination of which emits fifty times less VOCs, or volatile organic compounds, than PE/PU,” Price says. His company also completely revamped the stringer, a thin wooden strip running through a surfboard for strength. Firewire instead ran wood around the perimeter of the board, increasing both its flexibility and strength. “It’s a completely different animal,” Price says of their boards.

Boards under seven feet begin at $785, and longboards peak at $925. They also offer grom, or kid, sizes of select models that start at $499.

With professional reps like Timmy Reyes, Pacha Light, and Kelly Slater, whose firm, Slater Designs, often collaborates in boardmaking, Firewire is better known in the surfing world for their shortboards. But they have plenty of quality longboards on offer, too, as well as a solid amount of offerings in between. The boards in their medium-sized Crossover series, for instance, have serious paddling strength while remaining nimble, and The Gem, at 8-to-9 feet, was designed by two-time World Longboard Champion Taylor Jensen.

Firewire, which is ECOBOARD-certified by the watchdog Sustainable Surf, is the only major brand to use all bio-boards. “From day one it was a very strong eco ethic built into the company,” Price says. In 2014, Firewire became the first global surfboard brand to adopt bio-epoxy resin exclusively (though Price stresses that many smaller makers were crafting eco-friendly boards before them). They have also, over the years, been able to reduce their waste per board by 95% through recycling raw materials.

Compared to the traditional, toxic way of making surfboards, Firewire’s operation is a world apart. Beyond the toxic materials used, the real polluting factor of the traditional method comes in the clean-up process, which involves industrial solvents such as acetone, a known carcinogen. Because Firewire employs bio-resins, they can use citrus cleaners. They also offer traction pads made from algal biomass and a leash made from recycled plastic bottles.

Beyond working on new models, Firefire is always looking into ways to be greener, Price says. In June, the company started planting C02-sucking mangrove trees in Indonesia—enough trees, they found in a study, to offset all of the carbon emissions of the company globally. They’ve also started converting foam dust left over from the board-shaping process into paving stones, which line the grounds of their southern California headquarters. Price says he is pleased to see other brands adopting such green practices, approaches he hopes will eventually become the industry norm. “It’s got a long way to go, but it’s definitely happening.”

England vs. Wales live stream: How to watch 2020 Six Nations online from anywhere