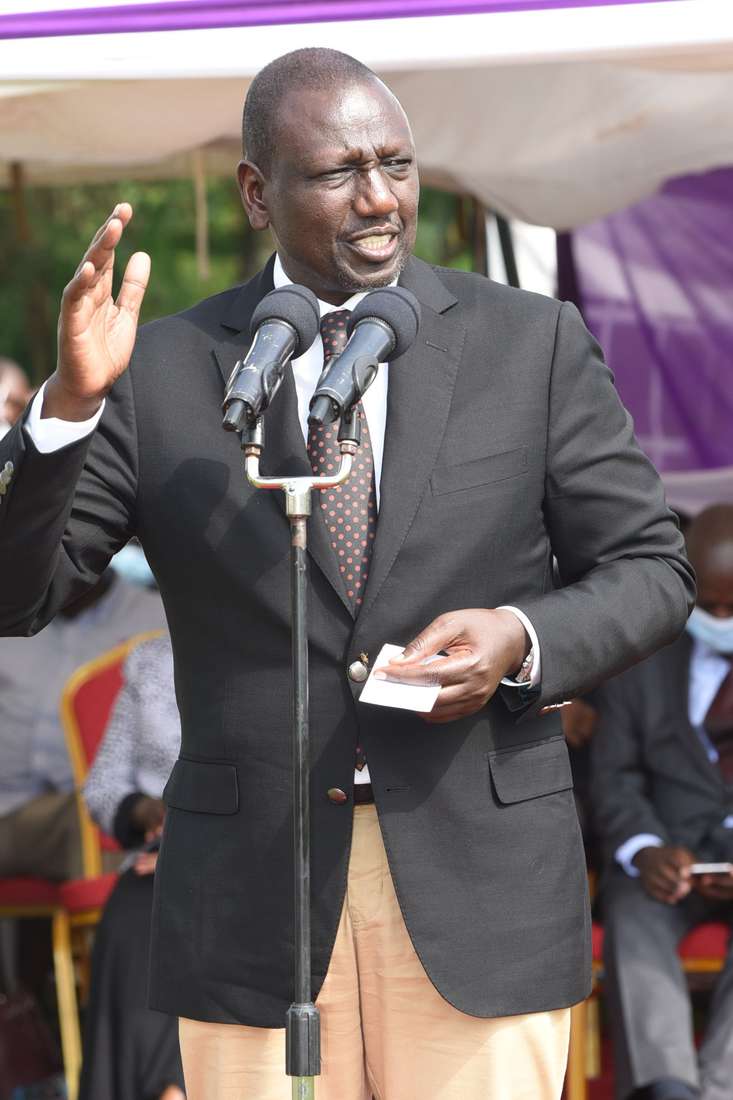 Deputy President William Ruto has dared the “system” to bring it on, saying, he has “God” and a majority of Kenyans to back what he said was an unstoppable 2022 presidential campaign.

It’s a group the DP earlier this year said was working to stop him from running, or if he does, winning, in the 2022 presidential poll.

In his boldest shot yet at deep state operatives, Kenya’s second in command Tuesday likened the roadblocks on his 2022 presidential bid to similar efforts to block him and President Kenyatta’s candidature in 2013.

“I just want to tell them: ‘We’re waiting for you’. This system, this deep state we are being told about, we are waiting for it,” the DP said yesterday.

“They’ll come with the system, but we will be there with the people and God and see who wins.”

So integral is this cabal of influential individuals in Kenya’s politics, it appears, that ODM leader Raila Odinga’s elder brother Oburu Oginga recently said Mr Odinga had gained what he lacked in his previous stabs at the top jobs—their support—but that he had now gained it with the March 2018 Handshake deal.

“All these elections, we have been getting the most votes, but not ending up in State House because we did not have the system. But now in 2022, we have both the system and our votes which are always the majority—what more could we ask for?” Dr Oginga posed in a speech that stirred debate in the ODM team, but which showed just how much premium politicians place on this faceless entity.

Isolated in government and staring at what would be an anti-establishment stab at the top job in 2022, the DP Tuesday said he had already gone through a similar experience with his boss — whose ear he now does not seem to have — and had surmounted those challenges.

He spoke at his Karen office when he hosted a delegation of community leaders from Kajiado South Constituency, led by MP Katoo Ole Metito and nominated Senator Mary Seneta.

“We must be steadfast and firm; after all, we are the people,” the DP said on Twitter.

Tuesday’s was one of the many groups Kenya’s second-in-command has been hosting at his Karen residence in a renewed bid to marshal support.

Last month, he claimed his allies were being threatened with corruption cases or Kenya Revenue Authority (KRA) tax demands.

“Some are being told that they will be demoted or be removed from their offices not because they committed an offence or failed to deliver, but because they are my allies,” he said.

In March, the Deputy President dared them to kill him, saying, it was the only way to stop his 2022 campaigns.  “I know … there is a scheme to demean and destroy my office and to ensure that I do not get anywhere,” he said at the burial of Sergeant Kipyegon Kenei, a security officer in his office.

“Those executing this elaborate scheme, ostensibly to stop me, I want to tell them: They may have the system, they may have whatever they have, but … we have God.”

Mr Ruto, Mr Kenyatta and four other Kenyans had been charged at the International Criminal Court (ICC) with crimes against humanity in the 2007 post-election violence that led to the death of 1,133 people and the displacement of 650,000 others.

Tuesday he said the “system” was out to block his bid, and had a similar plan to the ICC cases that the Jubilee pair faced at the height of their 2013 campaigns.

“What is happening to me right now is what Uhuru Kenyatta and I were told in 2013 about the ICC. We’re being told now that there is a system. That there is a deep state. That even if Kenyans vote for us en masse, there is a clique of people that will make the final decision,” the DP said Tuesday.

The Jubilee team had used their ICC case in 2013 to package their top rival Raila Odinga and the West as a common enemy and a threat to the peace and sovereignty of the nation—especially following the “choices have consequences” warnings by the US, seen as a call for Kenyans not to elect Mr Kenyatta.

The DP plans to adopt a similar strategy: Using his perceived persecution by the “system” to his advantage, just like they used the West’s disapproval of their candidature in 2013 to their advantage.

“We had all manner of threats in 2013: That we were not worthy leaders because we had the ICC cases; or that Kenyans choosing us will lead to consequences. If we were cowards then, we would not have clinched the presidency,” he said Tuesday.

Biden won’t rule out naming donors as envoys, despite criticism