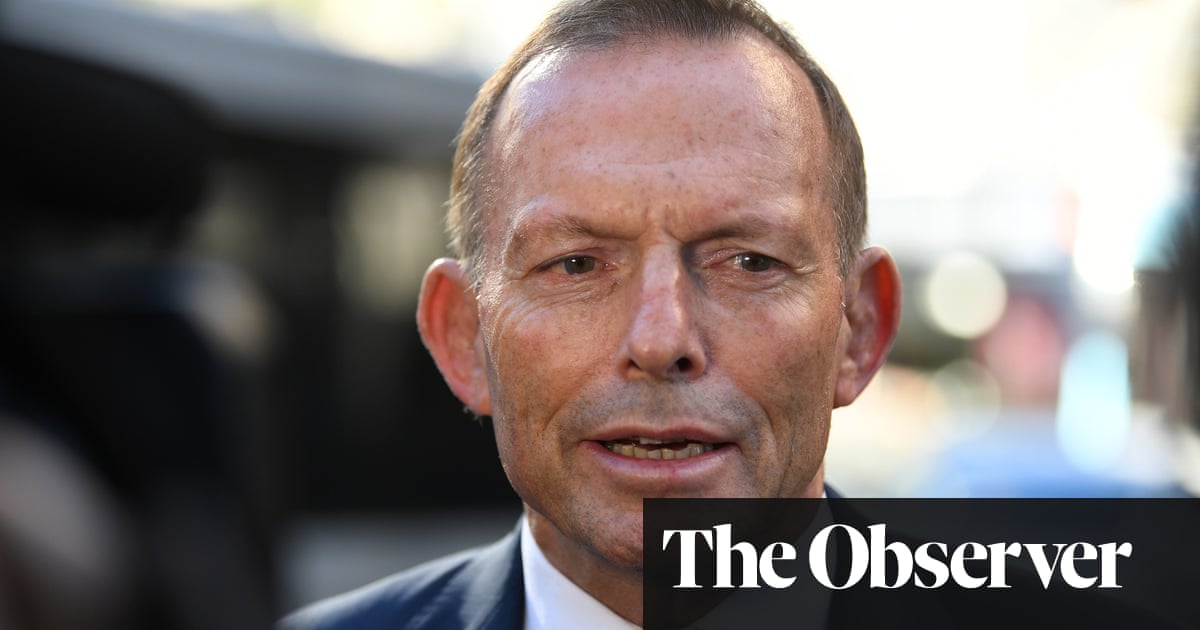 Tony Abbott, the former Australian prime minister, boasted that he signed deals with China because he was not “sidetracked by peripheral issues such as labour and environmental standards”, raising further questions over the UK government’s reported intention to use him as a trade envoy.

Abbott will reportedly be appointed to the Board of Trade, which advises Boris Johnson and trade secretary, Liz Truss, on future trade deals and will be a vital component of the UK’s future post-Brexit trade strategy.

Abbot’s past accounts of his role in Australia’s trade deals with China, Korea and Japan, signed during his two-year premiership, suggests he would have little sympathy with government’s stated intentions to maintain British standards on food, the environment and workers’ rights.

In a column for the Spectator Australia in March 2017, Abbott said he had made three contributions as prime minister to getting the deals done: setting a deadline, ensuring focus from the top, and endeavouring “to ensure that we weren’t side-tracked by peripheral issues such as labour and environmental standards”. He added: “Our insight was to grasp that free trade deals are too important to leave to the officials.”

During the Brexit campaign and since he became prime minister, Boris Johnson has insisted that workers’ rights and environmental standards would be maintained once Britain leaves the single market and customs union.

However, the government has repeatedly avoided attempts to guarantee those rights with legislation. It removed a section of the EU withdrawal bill that referred to workers’ rights, claiming they would be covered by a new employment bill. A bill was introduced last year but has yet to progress to a second reading.

It has also avoided attempts to include a “non-regression” clause to prevent the government from weakening environmental standards.

Tony Abbott would be a perfect choice to advise the government on how to undermine environment, animal welfare and food standards

Rules on the use of antibiotics in British farm animals have already been weakened after hundreds of restricted medicines were left out of regulations due to come into force in January. The Department for Environment, Food and Rural Affairs says a new list would be published in 2021.

Next month, the House of Lords is expected to vote on amendments to the agriculture bill, which seek to enshrine in law the Conservatives’ manifesto commitment not to reduce environmental or food standards as part of its post-Brexit trade strategy.

Green groups are concerned that news of Abbott’s appointment is part of a pattern. Shaun Spiers, chair of the Greener UK coalition, said: “Tony Abbott would be a perfect choice to advise the government on how to undermine environment, animal welfare and food standards. But if the government really is serious about not compromising these standards in trade negotiations, appointing him is bizarre.”

David Lawrence from the Trade Justice Movement said: “Hiring Tony Abbott to one of the top jobs in UK trade policy is a baffling choice.

“The government claims it wants Britain to be a world leader on tackling the environmental crisis, but in order to achieve this our trade policy – and trade appointments – need to be radically overhauled.”

Australian and British politicians have reacted with incredulity to reports of the appointment, which has not been confirmed, although Truss said Abbott had done “excellent work” on trade in the past. Critics say Abbott had little to do with Australia’s trade deals.

He is sceptical about the climate crisis and in 2014 as prime minister he attempted to delist 74,000 hectares of World Heritage-protected forest in Tasmania. His party ousted him as leader after two years and he lost his Sydney parliamentary seat in 2019 to an independent candidate who campaigned on the environment.