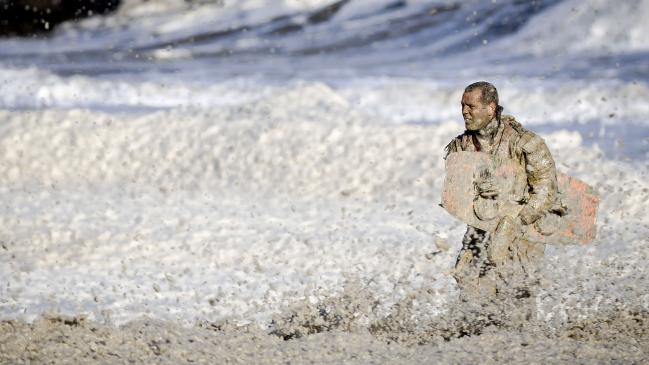 The Dutch surfing community is mourning the tragic loss of five local surfers who drowned at sea near Scheveningen last week, as details slowly emerge about the cause of death.

Five experienced surfers drowned after going out for a session in stormy weather that whipped up thick sea foam off the popular Dutch beach. Three of the deceased were qualified lifeguards, each closely involved in the local surfing community.

Dutch authorities said a group of six surfers jumped into the sea at Scheveningen, a suburb of The Hague on the North Sea, and were later reported missing.

The Dutch Coast Guard said three people were rescued, two of whom were later pronounced dead.

Two additional bodies were found, and a fifth body was seen floating in the waters as it was drifting out of reach. The search for the sixth man’s body is ongoing.

Local surfer Pat Smith had observed the “messy” waves off the harbour’s north side that fateful afternoon.

“I went training instead and left my phone in the car. When I came back I had 70 or 80 missed calls. I rushed to The Shore, the surf shop and hangout on the beach, and saw that a search and rescue operation was underway for the missing surfers.

“We have the sea foam every year … but that day I had never seen it so thick. It was crazy.”

Smith also confirmed he knew two of the deceased surfers: “They were internationally trained lifeguards.

“They have worked in Australia and received a lot of training from an international water sports association.”

The heavy sea foam is a seasonal occurrence at the Dutch beach, but the intensity was seemingly too strong for the athletes aged 22 to 38.

“When a group of people went surfing early in the evening, no one expected that some would not come home,” Hague Mayor Johan Remkes said in a statement.

“People here know that the sea gives and takes, but the manner in which so many young lives has been cut off is unimaginably cruel.”

The investigation is ongoing, and the victims’ full names are yet to be released. Although there is conjecture among locals about the cause of death, Smith identified the blinding sea foam.

“We will need expert analysis, but we think they got caught in the foam and became disorientated,” Smith said.

“If you can imagine swimming with just your head above the water and then there is a two-metre layer of foam above, it means you can’t see and you can’t breathe.”

World Surf League reported funerals for two of the surfers took place on Monday. As per tradition, local church bells have been ringing every evening to mourn those lost at sea.

A photographer told magicseaweed.com the local surfing community has paid respect to the dead by staying out of the water.

Professional Dutch surfer Eveline Hooft – who is placed at No. 32 on the current Women’s QS rankings – also paid tribute to the deceased.

“The wave is a 15-minute bike drive from my house,” Hooft told World Surf League.

“All of us are completely shocked and sad. My thoughts are with their family and friends and all the heroes involved in the rescue.

“These guys should be remembered forever.”