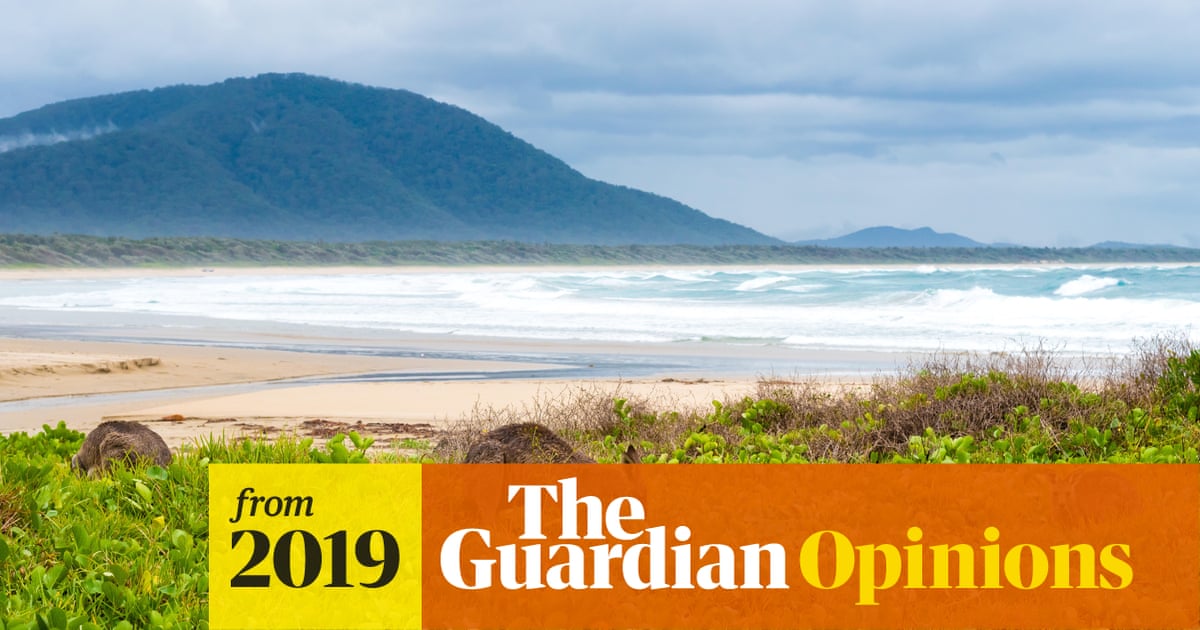 here were less visitors when the Pacific Highway was a deadly single, split carriageway that ribboned up and down mountainsides, arched wide around prime grazing pastures and seemingly ambled through every small town it could possibly find. In those times, it took up to nine hours by car to travel from the sandstone country of Sydney city to the casuarina and banksia-blanketed narrow strip of land and sudden trachyte dikes of Diamond Head.

A violent cleft on the northern side of the headland remains a defining feature; certainly it’s most striking upon first entering Diamond Head beach. Beyond lustrous red and yellow smooth hull-shaped rocks that sprawl from the foot of the promontory into the water, a vertical-walled gorge between the point proper and its gnarled, disjointed tip brims with sky.

From one of these ocean-worn, limpet-stippled backs I fished as a boy, catching platter-sized bream and, occasionally, smaller whiting, always elatedly losing all sense of time and my actual location in the world.

Across the rocks and through the corridor of the gorge brings you to the heaving sea, where the swell bursts into salt spray and cunjevoi glistens erotically inches above the low tide line.

Renowned local fisherman landed massive mulloway and tailor out there, but I only ever caught dog-sharks, or lost my lines to the submerged caverns and big kelp stands. If a gale wasn’t blustering it was easy to lose the world out there too, clambering around rocks and exploring glassy rock pools until the afternoon sun slipped below the curtain of the headland’s cliff face.

Sailing past in 1770, Lieutenant James Cook aboard the Endeavour noted in his journal the sighting of my ancestors on the southern slopes of the headland. This likely prompted him to imperiously name the place Indian Head. No doubt the old people were telling him to bugger off, but the south side of the promontory retains that misnomer to this day.

Cook also noted in his ship’s journal three mountains located some distance behind the headland that were so similar in shape he named them the Three Brothers. For millennia before Cook’s tool up the east coast, the mountains always were – and continue to be – regarded as significant to the Birpai peoples as the embodiment of three spirit-creator brothers.

In the early decades of the next century, more invaders intruded on this country. In the final weeks of John Oxley’s 1818 expedition, which set out six months earlier to explore the upper reaches of the Macquarie River, the interlopers were desperate to reach the established penal colony of Newcastle, situated over 200km along the coast to the south.

In order to ford what is presently named the Camden Haven River, Oxley’s marauding white gang robbed a local man of his canoe. Shortly afterward, the New South Wales surveyor general described in his journal the view from the back of Diamond-Indian head: “We saw the large lake under the Brothers from a high point on the coast very clearly, and found that on the north it was bounded by the North Brother, and separated from the sea by a strip of low marshy land about three quarters of a mile wide. This lake I think is a freshwater one: it was named Watson Taylor’s Lake”.

Resuming their hapless journey, the expedition team soon discovered they weren’t even the first whitefellas to set foot on the country. A small boat was discovered partially buried in the sand on the beach. Oxley identified it as belonging “to a Hawkesbury vessel”, owned “by one Mills, which had been lost some time ago”. Its missing crew had presumably been swiftly dispatched by my forebears.

In the days immediately following the discovery of the boat, my old people almost picked off another invader when a member of the expedition was twice speared for attempting to fell a cabbage-tree palm without obtaining the requisite local permit.

Later accounts by colonists describe the richness of the surrounding country before the environmental decimation that accompanied European incursion into our coast.

In 1830, a guest visiting the 1,039-hectare estate of Captain Archibald Clunes Innes – located around 30km north of Diamond Head on the western side of a similar sandy strip of land separating the Pacific Ocean from a low, reed-fringed lake – described forests of trees “embraced with creepers forming a vast canopy”, with 20-foot high tree ferns and large stag and elkhorn ferns growing in the forks of the older trees. “In no part of the world did I ever see such absolute midday darkness,” wrote the visitor. “Here was midnight with the Australian sun at its meridian.”

In 1770, Lieutenant James Cook aboard the Endeavour noted in his journal the sighting of my ancestors on the southern slopes of the headland

That habitat is now largely cleared. Only remnants of it can be found in protected pockets in Port Macquarie’s eastern suburbs.

In the campground on the southern side of the headland there is a reproduction of a wooden hut known as “Kylies Hut”, named in honour and memory of the Australian author Kathleen “Kylie” Tennant. In the early 1940s, Tennant lived locally in nearby Laurieton and returned to the area later for a period, intermittently residing in the hut while writing her social realist-historical novel, The Man On the Headland.

The book is set in Camden Haven, with a focus on Diamond Head and its landowner during those years, Ernie Metcalfe – known locally as the mad hermit of “Dimandead”. Metcalfe built the original hut especially for Tennant to write in.

Four hundred metres of beach below Indian Head’s southern slopes is likewise named “Kylies”. As is a lookout that provides a panorama of “scalloped surf” including Mermaid Reef, the blue-olive haze of the distant south-western dividing range and a 20km arc of golden sand running down to Crowdy Head. More recently, a walking trail over the back of the promontory has also been named in Tennant’s honour.

In the novel, the habitat at the start of the track leading to Diamond Head is still “jungle country with stag horns and orchids in the tree crotches”. Like Captain Innes’s guest, Tennant writes that the forest was “dark and shady … with lawyer vines tangled in the trees”, while across on the open slender plain which the track traversed “Christmas bells flickered a rush of small flames”.

But in the book, Metcalfe (and his brothers) make repeated attempts to transform the natural landscape. They plant strawberries, oranges, cabbages, corn fields, tomatoes, passionfruit and bananas (“Flying-foxes came over in clouds and tore them off the trees”). Finally the mad hermit resigns himself to pumpkins, before setting about draining Watson Taylor’s Lake, supposedly just for a folly.

Yet, throughout the novel Tennant rails against the introduction of rutile mining in the area and frequently laments its impact on the immediate environment around Diamond Head. Mining plant chewed out the sand dunes for rutile, zircon and gold, she writes, silting up the promontory’s natural freshwater creeks in the process. Presently, Tennant describes the mine’s dam as “stagnant and scummed with oily sludge”, and then the head’s southern freshwater lagoon becomes filled with “old motor tyres, rusted oil drums, jutting iron and timber”.

Tennant was undeniably progressive for the era. In the novel she reveals herself as an avowed and active feminist in the early 1940s. Later she would serve as an editor for Overland, a leftwing literary and cultural journal that was founded in 1954. However, like many white liberals today, her progressive principles seemed to be perfused with contradiction.

Like other whitefellas since invasion, for Tennant, Australia’s “foreign” landscape was deeply threatening, usually more so than it was beautiful. Her depiction of life in Diamond Head is imbued with this apprehension. The landscape has an unsettling presence about it: “You are living in the same cage as something uncanny and of unearthly strength. It is not the loneliness, the wild storms, the feeling of being cut off from humanity. It is the sense that Diamond Head is waiting to break you. It waits. … it seems to study out how to deal with men, find out their weaknesses.”

She describes Diamond Head as a state of mind, as though there lingers about it something unreconciled that Tennant, and the town, prefers to turn from. Her account of the headland’s history was singularly memorialised throughout the 70s and 80s. In contrast, its black history was peripheral, merely incidental to the domestication of the country by a procession of revered local pioneers.

Likewise, there are other illuminating descriptions in the novel: kangaroos are a scourge, swamp wallabies are only good for bait in fish traps. Tennant expressed the mindless exploitation of these resources lyrically: “They spoke of the run of mullet on the beaches, showed the groper and lobster holes for fish-traps. If you wanted moorhen or duck you only had to shoot them … There were plenty of kangaroos if you ran out of meat for the dogs. You could take a cart down on the beach and shovel up the pippies, boiling bucketfuls at a time for fowl feed.”

It didn’t occur to the whitefellas that Diamond Head pippies were a delicacy. Even as late as the 1980s, my non-Aboriginal grandfather still regarded them as fish bait. He used to flatly refuse the pippy gravy my mother made from the ones dredged up out of Diamond Head beach with our feet.

The resilience of our culture would have surprised Tennant. Like many white Australians before her, and since, she possessed a tendency to minimise and conveniently erase our presence in the landscape, writing in the book’s opening chapter that Diamond Head’s “aborigines were gone, all gone, like the smoke blown from their fires”. The “weakness that Diamond Head finds in man” which Tennant identified is essentially this lack of regard.

Sitting like a grass-tree in the scrub beside Kylies trail on the downward slanting spine of the headland, I peered over the lake, regarding Middle Brother and North Brother and the tablelands in the ranges beyond. It was my last visit to Diamond Head, now over a decade ago. My eyes, acclimatised to the louring winter light of a southern city, squinted against the hard glare of the afternoon, and my paled body steadily baked.

Wrinkled banksias surrounded me and Kylie Tennant’s account of the headland’s flowers – the delicate flannels and golden everlastings, the pale, wild violets – was on my mind. So too were the hordes of tourists lumbering up the trail towards the crest of Diamond Head from the campground packed with white caravans below.