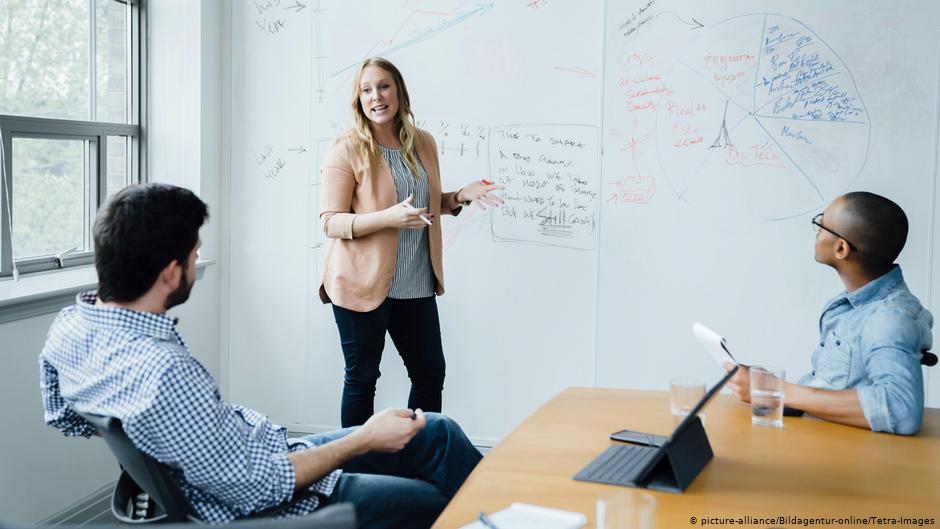 Between September 2019 and September 2020, six of the women on the management boards of Germany’s 30 most valuable publicly traded companies left, according to a study by the non-profit AllBright Foundation.

This cut the share of women executives in companies on Germany’s DAX index down to 12.8% at the same time that the US, the UK, and Sweden increased their equivalent numbers to around double that amount.

While 97% of top US firms and 87% of those in France have more than one woman on their boards, this is true for just four top German companies. Today there are 11 DAX-listed companies without a single woman on the board.

“Issues related to gender equality have become even more apparent during the coronavirus crisis,” German Family Minister Franziska Giffey said in June. “Maybe it hasn’t been a rollback to the 1950s, but we’ve seen in the last months how important these issues are and where there are still major inequalities in Germany.”

Our goal? No women on the board

That Germany has struggled, relative to other developed countries, to achieve gender parity might come as a surprise to those who know the country for its generous parental leave policies and its beloved female chancellor.

Giffey called out this national issue at the unveiling of the ministry’s newest gender equality initiative called ‘Strong for the future’, a project that aims to build on the government’s past efforts to increase equality between men and women in Germany through targeted legislation.

Among these goals is an initiative the Ministry hopes will finally increase the number of women at the highest level of management. Since 2016, companies listed on Germany’s major stock exchanges have been legally obliged to set self-designated targets for increasing the proportion of women on their boards. In 2020, 55 of these 160 firms listed their goal as “zero”.

So what is it that’s holding women in Germany back? Giffey’s ministry sees it partly as a question of will, or better said, a lack thereof. Setting leadership targets at zero means companies have no incentive to foster female talent. “This leads to a lack of a pipeline for women who can move up into management positions,” a spokesperson for the Ministry told DW.

Both the Family Ministry and the AllBright Foundation say German firms are caught in what is known as the ‘Thomas Cycle ‘ coined after the most common name among top executives of publicly traded German companies. For years, ‘Thomas’ has dominated executive boards, and statistics show he continues to prosper.

“There are more Thomases on these executive boards than women in total,” said the ministry speaker. “The number of Thomases even increased slightly in the past year.”

Thomas has become a symbol in the gender equality discussion for German firms’ tendency to appoint new executives that resemble the old ones. Over half of all board members at top German companies are male economists or engineers in their 50s who went to university in West Germany, according to AllBright. Board members appointed between September 2019 and September 2020 replicate these statistics almost perfectly.

“These are internalized stereotypes, especially in executive circles, about what is ascribed to women and men,” social economist and attorney Silke Martini told DW. “And women still come off badly.”

In Martini’s view, many of the people making decisions about upper management still have stereotypical ideas about what women bring to the labor force.

“Increasingly, I believe, it is also playing a role in that women themselves have internalized these stereotypes, that they themselves ‘voluntarily’ give up their careers because somehow they can’t really get away from this old role model of the good housewife and mother.”

These “gendered distribution roles” are another reason for the dearth of female corporate leadership, the Family Ministry concurred. “The male-breadwinner model is still strongly represented in Germany,” the speaker said.

The question of childcare

This tendency to divide up labor according to traditional gender roles goes deeper than personal taste or discrimination.

“That’s a bit of a German phenomenon, because there’s not enough childcare or care for elderly family members available,” said Kristin Rose-Möhring, who served as Equality Officer at the Family Ministry for almost 20 year until January of this year.

“That means a lot of part-time work” for women”, she told DW. “And then you’re immediately out of the pole positions. Not everyone and in every situation, but it’s already harder to get started.”

Despite a recent push to increase the availability of childcare, an ongoing shortage means nearly 340,000 children in Germany are currently unable to be placed in a facility, according to 2020 figures from the Cologne Institute of Economic Research (IW Köln). This number is likely to go up. The number of parents seeking childcare for one and two-year-old children has rise significantly in the past five years ago.

The childcare problem doesn’t end when the kids enter school. While children in countries like the US, the UK and France are served lunch at school before continuing with classes and other activities in the afternoon, most German primary and secondary school pupils go home at midday.

Parents of school-aged children are hard pressed to find a childcare solution that doesn’t involve one or both parties cutting back on face time at work. While in theory Germany’s parental leave policy provides near equal opportunity for both parents to reduce their working hours or take a leave of absence, cultural and financial pressures mean that in practice it’s generally the woman who cuts back.

Martini believes such decisions have little to do with a family’s personal choice and that they are instead a structural matter.

A cycle of discrimination

The cycle of structural factors that reinforce stereotypes about gender has wide-reaching consequences for German society. Not only does it keep fathers from their children and hurt women’s chances of rising up through the corporate ranks, it also harms companies’ access — or perception of access — to women qualified to manage at the highest level. 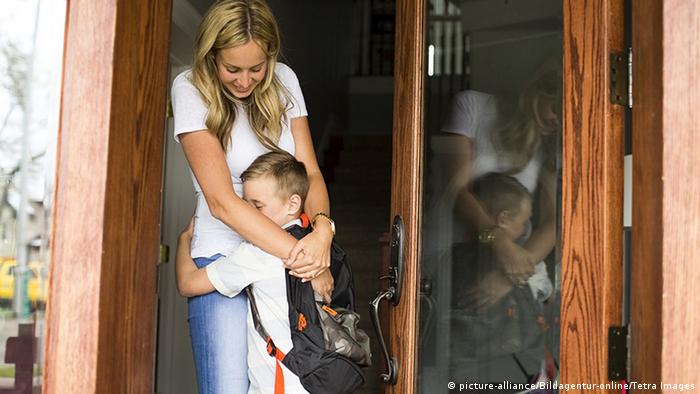 Women tend to take on more childcare duties than men, even if both parents work the same amount

Data shows the pandemic is only making things worse. Before the coronavirus outbreak, the brunt of household work in Germany fell on women. Some 72% of women reported doing household chords every day, versus just 29% of men, according to a 2019 study by Eurostat and Destatis.

With the amount of unpaid household labor that falls on women, Martini says it’s no surprise that many don’t hold managerial aspirations. This burden has only increased during the pandemic. Around 24% of women in Germany reduced their working hours during the springtime lockdown, compared to 16% of men, according to a survey from the Hans Böckler Foundation. Of couples who said they normally split housework and childcare equally, only 62% reported still doing so during the crisis.

Firms reckon with the future

Multinational car rental company SIXT is among the top German firms with no women on the executive board and no official goal of adding one. The reason for this German phenomenon isn’t due to lack of talent, executive board member Alexander Sixt told DW.

“There is a growing talent pool of women with strong ambitions and great leadership potential, especially in Germany,” he said. “In other words, the problem is not that no woman wants to be a manager. Rather, the general conditions are simply not attractive and sometimes not compatible with an integration of family and career.”

The car rental company’s five-person board is made up primarily of family members: the founder and his two children, who all happen to be men, Sixt explains, a situation not uncommon in Germany, where the business landscape is flush with family enterprises. 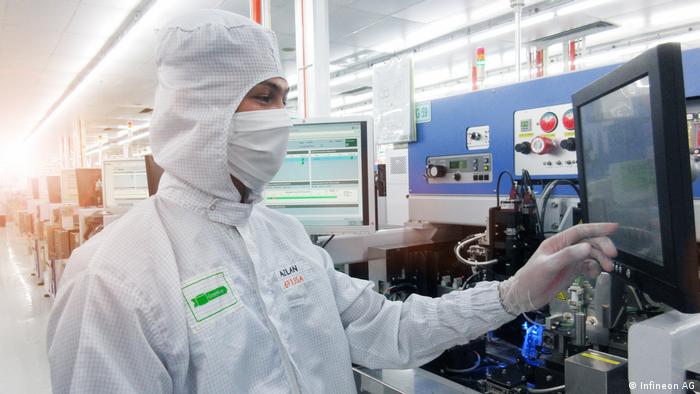 Infineon Technologies is one of many German companies with no women on its executive board, but it says it hopes to change this

Sixt said it is his “personal wish” that the company continues to build on the share of women in upper management and ultimately to add a woman to the executive board. Other companies on the gender red list expressed similar enthusiasm for change, but pointed to barriers in doing so.

Semiconductor manufacturer Infineon Technologies aims to have a woman join its board in the medium term, but said finding talent in the semiconductor industry has been a challenge. “The majority of the functions in our company are very technical,” Infineon spokesperson Gregor Rodehüser told DW.

Some speculate that Germany’s heavy reliance on technical and industrial fields — industries that tend to be associated with men — is behind the low number of women executives.

It’s true that women are more likely to work in social or service-focused jobs. But even within women-dominated fields, the majority of leadership positions are held by men. At the same time, many of the German firms with no women in top leadership — on neither the executive nor the supervisory board — are largely companies providing digital services, while industry powerhouses like Thyssenkrupp, Daimler, and Continental already have women represented at the highest level of management.

Corona vs. the Constitution

Martini says it’s important that top management is aware of structural problems within the organization that are hurting women, and that the desire for change isn’t in sentiment only. 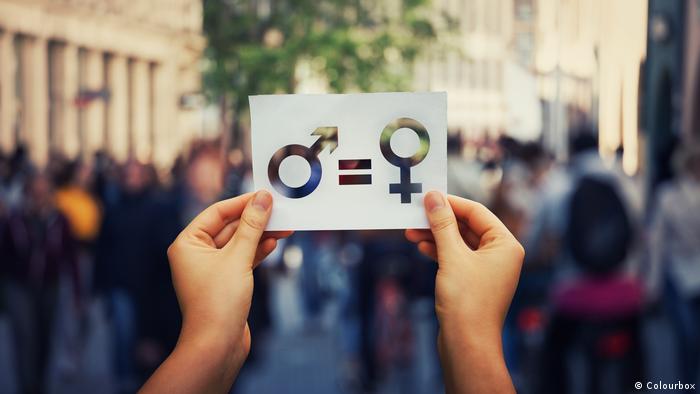 “There is a nice term. It’s called ‘organizational cynicism,'” she said, “where an organization acts like it’s committed to the issue, but the structures of the organization continue working against it.”

SIXT appears to recognize the weight of responsibility that comes with commitment to change.

“We adamantly reject the idea that women differ from men in their potential to take on leadership responsibility,” Sixt said, “But rather, see leadership competence as something that every person can learn through experience, constant reflection and the right tools. And we are investing in this.”

Asked how things might develop during the coronavirus, Martini says she hopes that awareness of the structural factors contributing to unequal opportunities between women and men will come more clearly to the forefront again.

“We can hope that we again muster a political will in this society that says, ‘Wait a minute. We still haven’t achieved the constitutional mandate from article 3.'”