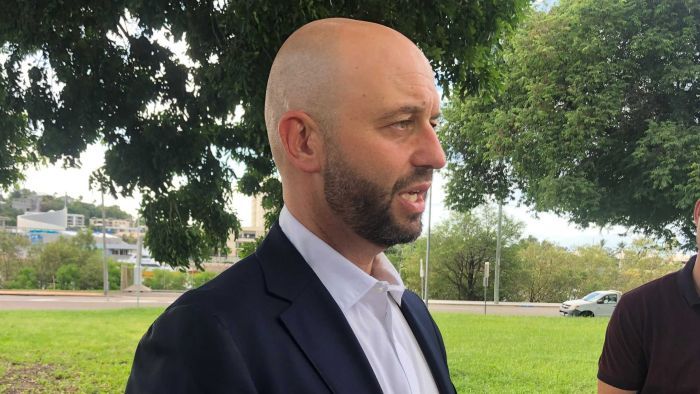 
Photo:
Todd Greenberg said round one will take place as scheduled, but round two would not have spectators present. (ABC News)

NRL chief executive Todd Greenberg has confirmed that all NRL round one games will go ahead with fans in attendance, but matches will be played in empty stadiums for an undetermined period from round two.

Greenberg, speaking from Townsville, ahead of the first match to be played at North Queensland’s new stadium said the code would fall into line with the Morrison Government’s new rules, which recommended the cancellation of all non-essential public gatherings of more than 500 people after Monday.

“In simple terms, all NRL games in round one will proceed as planned, with stadiums open and fans attending,” Greenberg said.

“In round two, fixtures will continue but stadiums will be closed to fans. We want 16 teams and eight matches playing every weekend.”

Greenberg said the health of NRL fans and players was paramount but he could not put a timeframe on how long the fan ban would last for.

He said they and any other player who displayed symptoms would be tested to safeguard other players.

“We have been in contact with Cronulla and if players are presenting with flu-like symptoms we want them tested,” Greenberg said.

Greenberg also said that if clubs faced financial difficulties as a result of the fan lockout that the NRL would look to “keep them afloat”.

While the NRL has kicked off, the AFL is set to begin next week and could do so without crowds after a directive was issued for AFLW matches from Saturday to be played behind closed doors.

AUS v NZ ODIs to have no fans

Cricket Australia announced on Friday that the three-match series would go ahead, but that fans would not be admitted into the venue.

Australia and New Zealand will now play two matches in an empty Sydney Cricket Ground on Friday and Sunday, with a third match scheduled for next Friday at Hobart’s Bellerive Oval.

Fans who have bought tickets will be eligible for a full refund.

“A decision will be made in due course regarding Australia’s three-match Twenty20 International tour of New Zealand,” Cricket Australia said in a statement.

That series is scheduled for matches in Dunedin (March 24), Auckland (March 27) and Christchurch (March 29).

CA also announced that the Australian women’s cricket team’s limited-over tour of South Africa would not go ahead.

Australia — fresh from winning the T20 World Cup final against India last weekend — was due to play three ODIs and three T20Is against South Africa beginning with a 50-over match in Durban on March 22.

Andrews ‘not in a position’ to confirm AFL go-ahead

Australian sporting authorities are all having to assess how they respond to the coronavirus.

The NRL season began last night with Parramatta defeating Canterbury Bulldogs 8-2 at Parramatta Stadium in front of a crowd of 21,363.

The AFL competition is due to kick off next Thursday, with Richmond playing Carlton at the MCG.

Last year, the equivalent fixture drew a crowd of 85,716.

However Victorian premier Daniel Andrews has warned he cannot yet confirm whether AFL games will proceed as the state and league grapple with issues of public health.

Mr Andrews said “detailed discussions” were ongoing with AFL chief executive Gillon McLachlan and others over the impact of the coronavirus.

Photo:
The opening match of last year’s AFL season drew more than 85,000 to the MCG — will the fans be there this time?
(AAP: Julian Smith)

“They [the AFL] are going to have to confront some of the issues as well — whether they proceed [with games], and if they do, whether they can have fans,” he said.

“I know it is frustrating not to be able to tell you whether there will be footy next week.

“I’m not in a position to do that. I have been clear all week this [coronavirus] would be disruptive.

“We will be asking things of Victorians and, indeed, of Australians things they have never been asked before. That is very frustrating.

“You have got to be guided by the advice and nature of the pandemic as the advice changes rapidly.”

No fans at All Star Mile but Racing NSW allows them

Horseracing fans will still be allowed to attend the Group I Coolmore Classic meeting at Rosehill Gardens on Saturday.

Shortly after Prime Minister Scott Morrison issued a statement saying gatherings of more than 500 people would be banned from Monday onwards, Racing NSW said it would act in line with that advice.

“Racing NSW refers to the advice received from the Commonwealth and NSW Governments that they are moving towards restricting public gatherings of over 500 people from Monday, 16 March 2020 but that there are no restrictions in respect of such gatherings over the weekend,” Racing NSW said in a statement.

“Consistent with that advice, thoroughbred race meetings in New South Wales on Saturday, 14 March 2020 and Sunday, 15 March 2020 will remain open to the public.

“However, Racing NSW urges people to be conscious of the health and welfare of themselves and others at all times.”

In Victoria, the All Star Mile meeting at Caulfield will go ahead but without public attendees.

The Melbourne Racing Club confirmed the news in a statement.

“We have now been advised non-essential mass gatherings attended by more than 500 people should not proceed from Monday,” the statement read.

“In the interest of patron safety, in consultation with Racing Victoria, the MRC has taken the decision to take extra precaution and proceed with The All-Star Mile Race Day without spectators. Only persons essential to the operations of the race meeting will be admitted into the racecourse.”

Those who have purchased tickets or packages will be offered a refund.

The NBL has elected to play the rest of the grand final series between the Perth Wildcats and Sydney Kings behind closed doors and will cancel it if any player tests positive to COVID-19.

From Friday night’s match in Western Australia, crowds will not be allowed into arenas to watch matches.

“After consultation with local, state and federal authorities as well as our clubs, we have made a decision that the remainder of the NBL Grand Final Series between the Sydney Kings and Perth Wildcats will be closed to the general public,” NBL owner and executive chairman Larry Kestelman said.

“The health and wellbeing of our players, staff, officials and fans is paramount. As a family sport we felt this was the only decision to make.

“We commend the Kings, Wildcats and their ownership groups for supporting this move despite being a difficult commercial decision for all concerned.”

The Wildcats lead the best-of-five series 1-0.

Surfing has also been affected, with the World Surf League deciding to cancel all events for the rest of March, including the opening event of the year in the men’s Championship Tour, scheduled for Snapper Rocks on the Gold Coast from March 26.

“We did not take this decision lightly as we are aware that it has a significant impact on the surfing community,” the WSL said in a statement.

“However, the health and safety of our athletes, fans, and staff are paramount. From the standpoint of social responsibility, we also take very seriously the role our events might play in accelerating the spread of the virus.

“We’ve been in close contact with our athletes and we feel strongly that this is the right thing to do right now.”

The WSL said it was “closely monitoring and evaluating the status” of upcoming events, including the next Championship Tour event at Bells Beach in Victoria.

Virgin Australia cabin crew member tests positive to coronavirus and had contact with public, but airline won’t say where