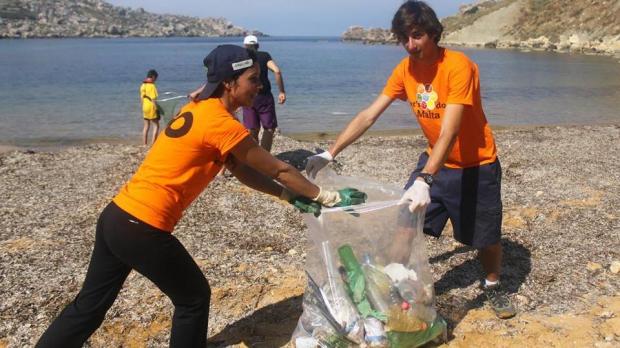 Cigarette butts and plastic items are what mostly litter Maltese beaches, according to the preliminary results of a citizen science monitoring programme.

The programme was held as part of a successful beach cleaning initiative organised earlier this month by Let’s Do It Malta.

The initiative, was carried out simultaneously across 15 countries bordering the Mediterranean, helped raise awareness about the harm and negative impact litter could have on the marine and coastal environment.

The Marine Strategy Framework Directive requests of Malta and all other EU states to develop and implement measures and monitoring programmes aimed at reducing marine litter and assessing the state of health of the marine environment.

The very slow rate of degradation of most marine litter items, mainly plastics, caused a wide spectrum of environmental, safety and health impacts on the marine life.

More than 1,000 volunteers took part in the initiative to clean up Malta’s coastal shore.

Mepa said in a statement today today that a number of volunteerswere assigned to clean up St George’s Bay in St Julian’s, Ghajn Tuffieha Bay in Mgarr and Pretty Bay, Birzebbuga and agreed to participate in a citizen science monitoring programme. Using specific guidelines under the supervision of Mepa board member Victor Axiak, the volunteers moved along given transects and carried out visual counts to monitor the type of marine litter found on these beaches.

The first preliminary results show that cigarette butts and plastic items were by far the most frequent items littering beaches.

Most frequent in St George’s Bay, cigarette butts outnumbered the total of all other litter items five times over.

While cigarette butts were also the most frequent litter item at Pretty Bay, they were found to be much less frequent than at St George’s Bay.

With plastic items being the second most frequent type of litter on Maltese beaches, the plastic found at Pretty Bay was double that found at St George’s Bay.

In terms of total litter and apart from cigarette butts, the beach at Ghajn Tuffieha was found to have almost twice as much litter as any of the other two beaches.

Mepa said that such data did not only assist in the compilation of monitoring data for the purposes of the EU directive, but also provided valuable information for the management of protected coastal areas, including areas forming part of the Natura 2000 network of protected sites.

Prof. Axiak said the success behind the clean-up not only helped sensitise and educate the public about their responsibilities towards the environment, but also promoted the concept of citizen science.

“Engaging the participation of volunteers and members of the public to assist Mepa and other organisations in collecting valuable environment monitoring data will increase environmental stewardship in our country,” he said.

Faisal Sadegh, national coordinator of Let’s Do It Malta said “being an active part of our society brings with it a great personal satisfaction and we urge people to volunteer for this monitoring programme which benefits our marine and terrestrial environment.”

More results are expected from other beaches as more volunteers are assisting Mepa in its endeavour to undertake a check of the islands’ coastline.

People who would like to volunteer and contribute to these surveys should contact Let’s Do It Malta national coordinator Faisal Sadegh, email: [email protected] .

Independent journalism costs money. Support Times of Malta for the price of a coffee.