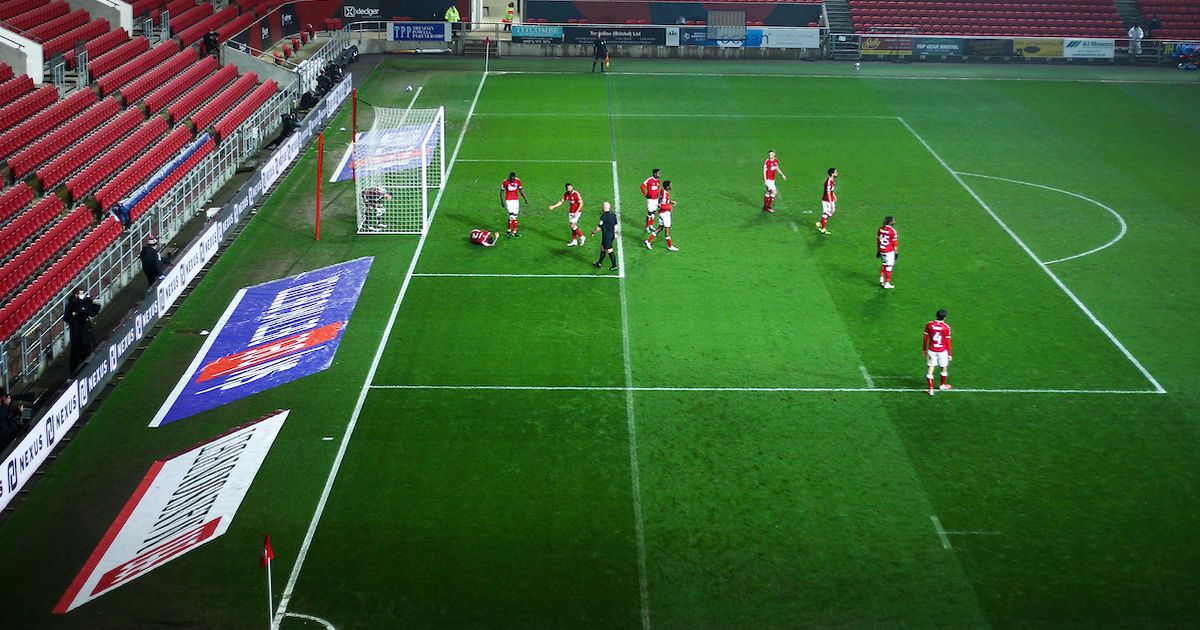 It was not to be in Nigel Pearson’s first game in charge of Bristol City at Ashton Gate, and having never lost to a Bournemouth side as a manager before Wednesday’s 1-2 defeat.

If City were lucky to have not been behind to Swansea City at the weekend, the football gods were evening things out back over the other side of the Severn Bridge.

A draw was looking the likliest result from last night’s game, but then this City team does not share the points having recorded the fewest draws (3) in the division this campaign. Win or bust then. And on this occasion it was the latter.

This was a fourth league home defeat in a row and that’s that regarding any notion that the Robins might finish in the top six for 2020/21. Of course, you keep fighting to the end. But effectively City are 12 points off where they want to be (factoring in their awful goal difference).

Still, Pearson has come in and steadied the ship – and performances are much better than that of a few months ago. It was three shots on target to four by the end of last night’s game, that saw both sides enjoy periods of pressure, if the team from the south coast monopolised the ball for more of the contest.

Relegation has been avoided, at least (one more win should be all that is required), and it’s a case of how high this City side can now finish, with players to come back from injury and give the best of themselves next season.

“The two goals we conceded were avoidable, and we have to learn from those mistakes,” said Pearson after the game.

Many of City’s best players were their youngest ones here, and they will get better.

Perhaps the win at Swansea used up City’s luck. A fortunate second goal for the Cherries, as Philip Billing headed against teammate Cameron Carter-Vickers with just seconds to go in the game saw the three points head back with the visitors to the Vitality Stadium.

City had taken the lead through Tyreeq Bakinson’s exquisite first-half header before Jonathan Woodgate’s side got on even terms seconds before half-time. Dan Bentleys pilled an Arnaut Danjuma cross into his own goal, but the referee failed to spot an apprent blow to the head of Jack Hunt in the build-up, distracting everybody at the near post.

Pearson refused to acknowledge it as an excuse and City’s chance to move within six points of the top six after two good 1-3 wins on the road, was gone. The breaks did not go their way on this occasion, though there were plenty of positives

The Cherries were victorious last October in the match between the pair at the Vitality. But those were different times, when both clubs had appointed assistant head coaches to the top jobs. Jason Tindall and Dean Holden did not last the season.

The new incumbent in the hot seat in BS3 saw fit to keep all of the team intact that won at Swansea City on Saturday, bar replacing 18-year-old Ryley Towler with Steven Sessegnon in a bid to strengthen City’s left flank, and to avoid the tyro having to start three Championship games in quick succession. And the Fulham man did very well on his third league start of the season.

Zak Vyner began the game stationed in front of the back four as the Robins finished the game as they had at Swansea: in a 4-5-1 shape. He ended it at right-back after Hunt was removed in the second half following a head knock sustained in the first half.

With Ashton Gate experiencing sound problems at the beginning of the game, disrupting the fake crowd noise pumped in, with loud bangs blasting out of the PA System sounding like those of fireworks greeting Pearson’s arrival in BS3, Lloyd Kelly almost created a racket himself.

The England U21 player shot high as he returned to his former stomping ground to slam over the bar following Junior Stanislas pulling back after a short-corner routine in the opening minutes. It was one of the best openings in the game.

And the £13m former City man then shot wide again as he found space inside the Robins area shortly after as the home side weathered an early storm that included drizzle and mist in a dank Ashton Gate.

City were indebted to Adrian Mariappa as the former Watford man swept up to deny Dom Solanke scoring following Bentley pushing a Lerma shot away from goal.

After a quarter of an hour, City did finally get going themselves – with Asmir Begovic doing the same at the other end, recovering as a rebound fell to Famara Diedhiou with the Senegalese forward’s powerful effort pushed aside. The game was then in the balance, with Bournemouth on top initially but pushed back by City after that difficult opening 15 minutes was navigated.

A dogged persistance to remain in the game was almost rewarded after half an hour when Hunt crossed, Diedhiou won a header in the box and Bakinson teed up Palmer to slide just inches wide of the far post.

After 38 minutes there was more precision: Palmer wriggled down City’s left, crossed low and the ball ran all the way out to Hunt on the other flank. A pinpoint cross was headed into the top corner by Bakinson for his second goal of the season.

And the Robins deserved it. The home side had seen off the early attacks and countered intelligently themselves, with Bakinson and Palmer effective in the middle. The former as an advanced central midfielder, the latter carving apart the opposition defence from wide.

That momentum was checked in first half injury time, though, as Danjuma shot at goal, Bentley saved and a corner came. Again Danjuma threatened and as the first cross was repelled, a second cross was pushed into his own goal by Bentley. A cruel blow against City’s undoubted player of the season so far, with the keeper pointing towards the downed Hunt in fornt of him as a distraction.

Referee Simon Hooper saw no foul nor stopped play for a head knock and the goal stood.

After the break the repercussion: Hunt unable to carry on after going down just before the break. Henri Lansbury replacing him and Vyner switching to right-back.

Both sides took it in turn to swing the punches, Smith bravely stopped by Sessegnon at the back post before the left-back’s low cross, as he was sent scampering away by Lansbury winning the ball high up the pitch, went without a prize. Both sides looked for the knockout blow. Alas, the Cherries found one as Billing stole in with seconds left to convert from Danjuma’s corner and the game was up – and also City’s unlikely stab at the top six this campaign.

Lloyd Kelly is destined for the top if he keeps improving. The former City defender was a thorn in the side of his former team all Wednesday evening, with several shots at goal close to making the difference, and Kalas only just keeping out one low drive across goal late on.

Following the game Woodgate picked out one moment that showed the class of the England U21 player, still just 22: as he roared back to demonstrate his awesome pace late in the game to dispossess Antoine Semenyo, who is no slouch and

Of Kelly’s performance at left-back, Woodgate enthused: “Lloyd can look like a Rolls-Royce at times.

“It is all a matter of consistency how far he goes in the game. If he goes on performing like that a lot of Premier League clubs are going to take notice.

“Junior Stanislas is claiming our first goal and I don’t blame him. The ball was on target when the keeper dropped it.

“We went on to dominate the second half and were well worth our win. I’m not sure how the winning goal went in, but I don’t care,” he added.

Liverpool were close to signing the player in the summer of 2019 ahead of the Cherries and another giant side may not be too far away for the talented and versatile Bristolian defender.