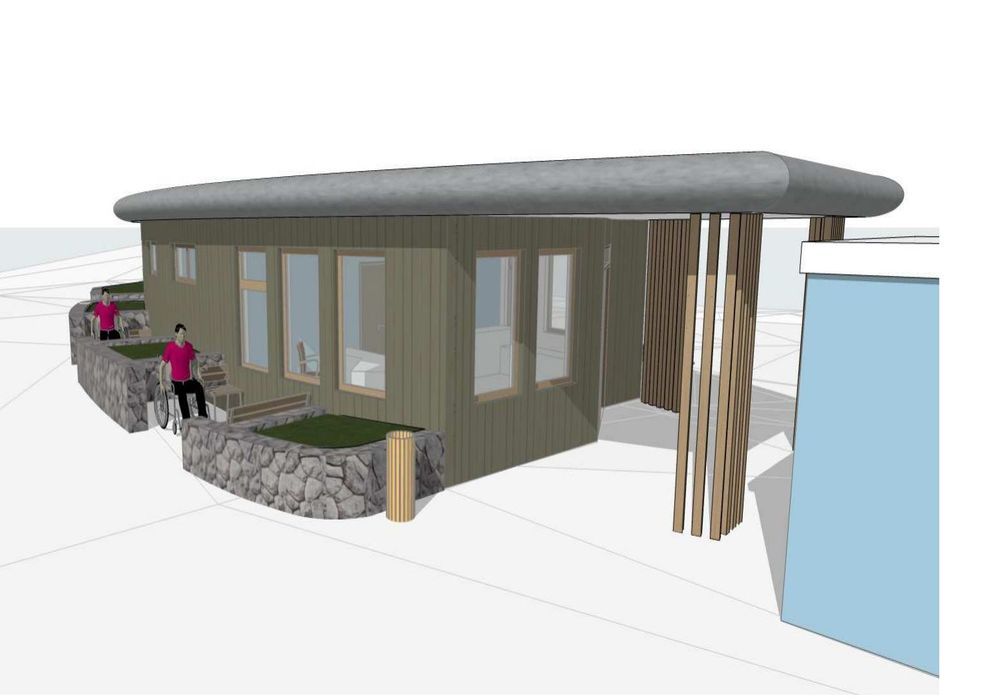 The crew of the BBC DIY SOS and dozens of local volunteers have been welcomed to Swansea for the official start of their latest Children in Need Big Build.

An artist’s impression shows how the planned new build for Surfability at Caswell Bay, Swansea, which is to feature on DIY SOS, will look. Credit:Huw Griffiths Architects Ltd

Swansea Council leader, Rob Stewart and Cllr Robert Francis Davies formally welcomed Nick Knowles and the rest of the production team to the latest development site at Caswell Bay where a state of the art adaptive surfing facility is being created for people with disabilities.

The new building will be built with skill and speed in just nine days, replacing an ageing storage unit currently used by charity – Surfability UK, who have operated an adaptive surf school from the unit for the last seven years.

Rob Stewart, Swansea Council leader, said: “We’re very pleased to be able to support the DIY SOS team with their plans to create a brand new surfing facility for people with disabilities.

“We’ve already carried out lots of improvements at our beaches to make them more accessible, including the creation of new sections of coastal paths between beaches along our coastline.

“This new facility will further enhance what we offer to residents and visitors to our wonderful coastline and will make a huge difference for those that need extra support to go surfing.”

Nick Knowles, said: “Surfability UK is becoming a world renowned in terms of adaptive surfing – working with charities across the globe including Australia and the US.

“They are looking after around 500 people who get support to go surfing.

“The new facility will be something that Swansea and the rest of Wales can be extremely proud of and with the support of the Council, they’re going to have a much better facility – and a world beating facility.”

Robert Francis Davies, cabinet member for investment, regeneration and tourism, said: “It’s great to have DIY SOS back in Swansea to do this project which will make surfing accessible to everybody.

“Caswell Bay is a beautiful bay and it’s extremely important for people with disabilities to be able to access this beach and take part in sports that more able bodied people do freely.”

Ben Clifford runs the adaptive surfing facility in Caswell Bay, he said: “Adaptive surfing provides the opportunity for people with mobility problems – wheelchair users, with the chance to experience surfing and have a lot of fun.

“I’m so excited about the plans for the new facility. Our existing building is literally a storage facility which floods regularly.

“We run a very special service which requires a building that has more room than we currently have so that we can make it more comfortable for the people coming here.

“As far as I know, this will be the first custom built adaptive surf centre in the UK.”

Maya Gabeira Rides the Year’s Biggest Wave, A First for Women in Surfing