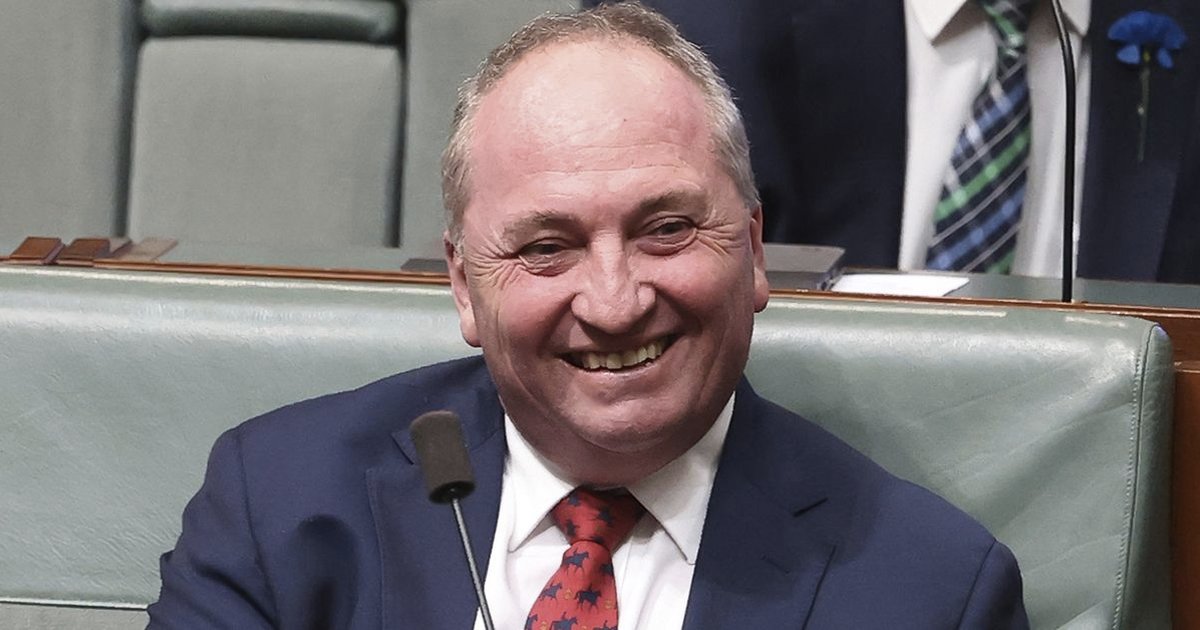 “Barnaby Joyce resigned as Nationals leader because of a sexual harassment allegation, which has never been resolved. Let’s not pretend that men’s careers are being ruined by allegations of sexual violence.”

Monday was a grim reminder of how shameful Australian politics can be, after a leadership spill saw Barnaby Joyce reclaim the title of Deputy Prime Minister — a title he lost three years ago for undoubtedly serious reasons.

It was a real punch to the gut to think that a man whose unresolved sexual harassment allegation — arguably one of the main reasons he resigned in 2018 —  could mosey on back into the country’s second-highest political office.

A Breakdown Of The Politics And Scandal

On Monday, the notorious National Party MP Barnaby Joyce, made a bid against Acting Prime Minister Michael McCormack and was successful in toppling the Nationals leader.

McCormack had supposedly lost the support of his fellow colleagues from fear that he wouldn’t be able to carry them through the next election.

He had been the leader of the National party for the last three years, and has since been praised by his party for all his hard work — though just last week he said that “hell will freeze over” before he starts listening to the Greens about climate change.

Before McCormack, Joyce — who is  also a climate change denialist — held the position as leader of the Nationals.

That was until Joyce resigned, over what many thought was for his scandalous relationship with his media advisor Vikki Campion, who he now has two young children with.

At the time, their affair was the biggest controversy in Australian politics. Joyce announced his divorce to wife Natalie Joyce, just mere months after news broke of his affair with his staffer, who was also pregnant.

The affair even triggered that infamous “bonk-ban”, which means ministers can no longer have sexual relationships with their staffers.

But many have since argued, that Joyce actually stepped down because of a sexual harassment claim that surfaced in 2018, which he continues to strenuously deny.

The Allegations Of Sexual Harassment

Three years ago, Catherine Marriott, a Western Australian businesswoman who has previously won WA Rural Woman of the Year, told the 7.30 Report that Barnaby Joyce had sexually harassed her.

According to Marriott, the incident allegedly took place in Canberra in 2016 after a function.

When speaking to the 7.30 Report, Marriott explained she chose not to report her experience to the police or the National Party at the time for fear of backlash.

“When it happened, he was the Ag[riculture] Minister. He was a very popular Ag Minister at that time, and I didn’t … I was … I’m just a little human against a big system, and I was terrified,” Marriott told the 7:30 Report, about the 2016 incident.

Then in February 2018, Marriott lodged a confidential complaint to the federal branch of the National Party. This launched an eight-month investigation into the complaint but according to Marriott, nothing came of it and, unfortunately, her name was leaked to the media against her will.

In a statement that was apparently sent by the New South Wales Nationals, Marriott was told that they had “been unable to make a determination” about the complaint of sexual harassment “against the former leader of that party… due to insufficient evidence”.

After that the investigation was pretty much finalised and the report was kept confidential. Nothing else has since eventuated.

Three years ago Catherine Marriott told @leighsales about allegedly being sexually harassed by Barnaby Joyce in the hopes it would “improve the way all political parties deal with complaints of sexual harassment”. Today Joyce was re-instated as Deputy PM. https://t.co/7U4lNz2zDd

A reminder: A sexual complaint by the highly-regarded @roseycatherine is what saw Mr Joyce out of Nats’ leadership in 2018, not a consensual affair. He denies it. Ms Marriott wanted it resolved privately, but was outed by the party. Today’s tough for her. https://t.co/hUf2nuQ1pO

I don’t think it’s mentioned enough that Barnaby Joyce faces detailed sexual harassment allegations, and despite an investigation by his party they remain unresolved. The only action taken was the Nationals outed the complainant.

I feel like Australia has finally reached rock bottom.

It seems that since his reinstatement as Nationals Leader and Deputy PM, Joyce hasn’t lost his regional populism with many of his supporters extremely excited to see what he can do for people living outside major cities.

However, some regional women are describing it as a “backward step” and are devastated over the news, because it still means a lack of women representation in the party’s top jobs, and helps reinstate the real “male culture of politics”.

But overall Joyce has support and power. Back in the top job, his career has not been affected by his alleged behaviour towards women.

At a time when Australian women have been expressing unprecedented levels of disillusionment and loss of faith in our parliament and political system the Government responds by…making Barnaby Joyce our Deputy Prime Minister. Honestly 🤦‍♀️

Barnaby Joyce resigned as Nationals leader because of a sexual harassment allegation, which has never been resolved. Let’s not pretend that men’s careers are being ruined by allegations of sexual violence.

Blokes: Barnaby Joyce resigned when it was revealed he was having an affair.

Women: Nope. Barnaby Joyce resigned because there were unresolved allegations of sexual harassment and inappropriate behaviour against him. AND THESE REMAIN UNRESOLVED.

That Coalition men can, with a straight face, continue to tell women they need to gain positions of power “on merit”, while returning Barnaby Joyce to the Nationals leadership is truly breathtaking.

Anyone else think Barnaby Joyce is unfit for public office?