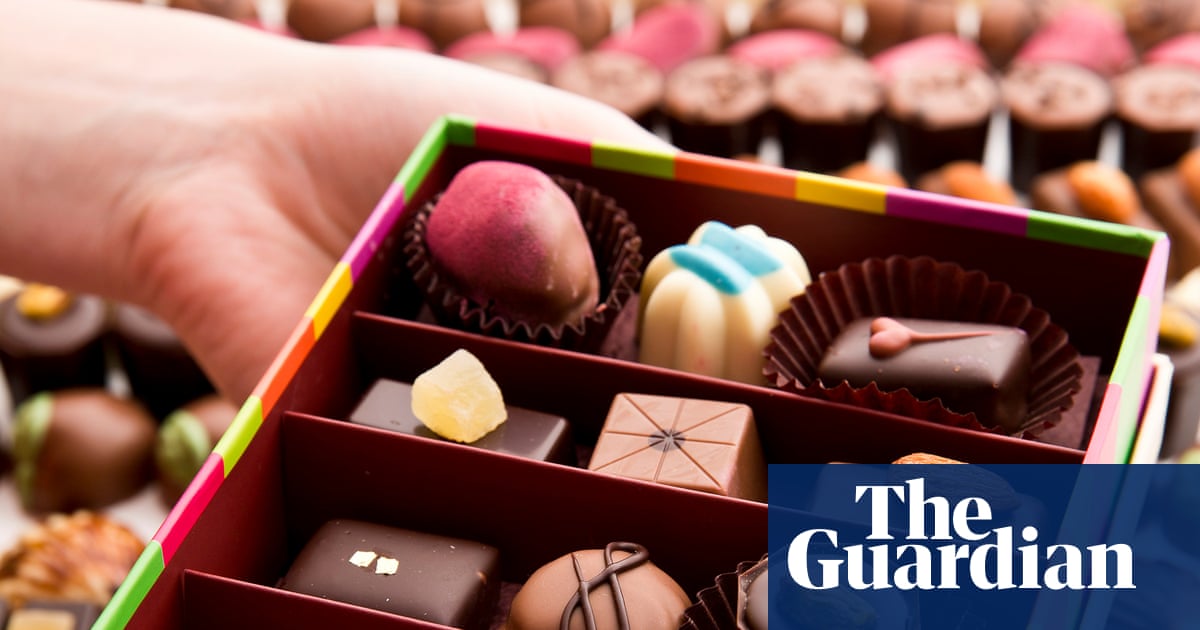 It’s the weekend after Easter but at the Great Ocean Road Chocolaterie and Ice Creamery in Bellbrae there are plenty of people who have not yet decided to detox from the chocs. As we walk in, past the lustrous ice cream stand (mango and peach, thank you very much) and the piles of free chocolate pastilles (milk, dark and white), there’s a satisfying but not stifling bustle to the place; the kind of buzz you might have three weeks into a January sale.

Simon Jessen, the general manager, says in fact today is a little quiet but he’s not minding too much. Last Sunday – Easter Day – saw the biggest footfall in the store since it opened in September; the previous Saturday the biggest sales. In this soccer pitch-sized building, the chocolatiers are behind glass at one end, finessing and preparing the stock they sell in the centre of the store. Simon points to the enrober, the chocolate coating tunnel, and the “cement mixer” that coats the sultanas and nuts. Some of the truffles can take three days to make; we try a delightful mint leaf chocolate one to experience the expertise. The chocolatiers are led by a Belgian and French team who have trained for at least four or five years and are now helping bring on a team of younger, Australian staff. “It’s like being a full-on chef,” Jessen says.

At the other end is an impressive cafe, subtly trying to cater for an eclectic, age-spanning clientele, where just over half the visitors land at some point during the day. The place has to be kid-friendly – the pizza “moobox” goes down a treat – but it can’t be only that; you’re just as likely to find young adults on a date or elderly couples coming in for treats and a nice day out. The chocolate sundaes are meant for sharing, surely by adults; they are the size of a child’s head. The biggest seller is the garish/sumptuous rocky road (a “rocky road festival” is planned, with 31 flavours of the marshmallowy bar) and there are plenty of eye-popping items for kids; metre-long bars, chocolate wombats. But more bars are sold for adults than for kids.

In a tasting room, the four of us (me, my wife, kids) take part in the “junior chocolatiers” show, making giant chocolate lollipops with all the trimmings; our kids cotton on to this, making designs both sweeter and better than their forebears. “Chocolate discovery” programs are offered too, for an older audience, where the chocolatiers talk about their techniques and do more involved tastings. We have a go at that, too, piling through the for-adults range illustrated with scenes from the Great Ocean Road. I’m up for the macadamia and salted caramel, with a design of the Twelve Apostles; C’sfor the lemon, lime and mint; the kids vote for chocolate malt and honeycomb. There’s an Indigenous range, with Indigenous-designed packets; the gum leaf and wild berry, our favourite, is easy to get wrong because it can be too soapy in the wrong hands. It’s delicious here.

With its wide-glass cafe and countryside setting, the chocolaterie, the sister store of Ian and Leanne Neeland’s Yarra Valley Chocolaterie (about the same distance the other side of Melbourne) has something of the contented feel of a successful winery. You could easily spend the day here. Whereas wineries tend to showcase the grapes of the local land, the chocolate here is all imported from Belgium and France, in pastille form, before being turned into the products; you could say that lends the place a slight contrivance. But Jessen says Leanne Neeland observes that if the chocolatiers do end up making the chocolate themselves, they will have done so only because they can, and not because they need to. The visitors like the European influence and this setting underlines Victoria’s fairly relentless commitment to the good life. This part of the world is about as edgy as one of their chocolate soaps.

We’re here as guests of the Great Ocean Road running festival, a two-day event on 20-21 May featuring everything from a 60km ultra marathon to a 1.5km “kid’s gallop”. Born out of the old Great Ocean Road marathon, the organisers have expanded and developed the event to embrace a wellness program, a kite festival, live music and free movies. They are keen to emphasise the family-friendly offerings this year and, like happy sheep, we largely follow the route suggested. From Avalon airport south-east of Melbourne on our way to the chocolaterie we stop first at Bells beach, which has just hosted the third championship event in this year’s World Surf League, won by Courtney Conlogue (women’s) and Jordy Smith (men’s).

The stands and the barriers are still up, but the local surf dudes are back having their go on the championship surf. If this were cricket, it’d be like the village side having a spin on the MCG. Emboldened to try the water – OK, not emboldened at all – we drive on to Anglesea Paddle Boat and Canoe Hire; the kids take a turn at steering a motorboat ($30 for 15 minutes) and then we take a gentler spin in a canoe down the Anglesea river ($35 for an hour). On a chilly day, it’s doing decent business.

There’s time to fit in one more treat, the Split Point Lighthouse, built in 1891 and still lighting up the coastline. More importantly to us it was the actual lighthouse in the actual Round the Twist, the clever children’s TV series with a catchy theme tune where a dad and his three kids move to experience the wilds of country life and end up contending with a haunted dunny, incontinent seagulls and a variety of other fantasy, sometimes unfecal, adventures. Our kids are delighted just to be here; by luck we get to peer inside and goggle at how narrow the lighthouse is. The sea pounds away and still the air is delightfully soft and soporific. “Have you ever … ever felt like this?”

We’ve stayed overnight on Saturday in a cabin at the Lorne Foreshore Caravan Park, right on the Erskine river. It’s busy and they are starting to trial winter glamping along the waterside. In the morning, the eldest and I walk in the rain along the coastal path in Lorne, an attractive medium-sized coastal town that’s home of the Pier to Pub swimming race, a smattering of hotels and plenty of places to eat. On the pier maybe a dozen fishermen are catching salmon, barracuda, stingrays and sharks. There’s plenty of runners and ocean swimmers doing their bit, maybe for the running festival or even next year’s swim.

We climb up to pick the car up from the historic Grand Pacific Hotel (not too faded, not too stuffy), where we ate hearty and upmarket pub grub in the bistro the night before (fish and chips, tiger prawn and chorizo saffron risotto) washed down with a couple of pints of Lorne lager.

Breakfast is at the popular The Bottle of Milk, flat whites and a bumper breakfast, serving burgers and beer later on. We just avoid queueing; other times of the year may be more crowded but the wait would be worth it. After that the least we can do was drive up and hike down to the Erskine Falls, a short walk for a big drop. The damp air is no distraction, in fact may even add to the atmosphere. At the bottom, with 30 metre of water plunging into the Erskine river, the rocks are temptingly, randomly arranged to encourage young ones to climb right up to the waterfall and, while I wouldn’t encourage it every time, it’s no problem either.

Lorne has plenty of walks, many child-friendly, and given an extra day or three we would have piled through more. As it is, it’s time to go off-script and drive for a couple of hours to the Twelve Apostles, one to tick off the Australia bucket list. From Lorne to Skenes Creek and beyond Apollo Bay, the road hugs the coastline tightly, sometimes vertiginously, and the sea pounds away. Then, for the second half of the trip until the apostles, you scarcely see the water while remaining always aware of it; instead the landscape mixes brooding rainforest in the Great Otway national park with expansive, presumably cleared, farmland.

There is scarcely a car to pass or pass us, which makes it something of a contrast to make it into the Port Campbell national park and the coachloads and carloads. A gazillion words have already been written about the apostles (now just eight, with a ninth one collapsing from erosion in 2005). Suffice to say the crowds can appear at first glance overwhelming but there’s no problem getting that photo you want. And the view from the boardwalks are of course breathtaking. Our son notices how the almost-symmetry of the limestone combinations and a deep dark line about a third of the way up above sea level create a mirage. The bottom of the visible rocks appear to be reflecting in the sea, when in fact they are above the water. Our kids ordinarily don’t much go for a view, but they do here.

We pelt back through the deep dark woods to La Bimba in Apollo Bay, a stunning and deeply satisfying restaurant that has plenty of decent meat but, above all, great fish. It is packed on Sunday night and takes two sittings on Friday and Saturday in peak seasons; it’s easy to see why. The menus, backed by a copper clipboard, are the only remotely heavy thing about it. C and I tuck into a fabulous whole red snapper for two. With main courses that good it would be easy for them to neglect the puddings, but they haven’t and somehow I find room for “pain perdu, fig leaf ice cream and berries”, a brioche-based dessert (literally with a brioche base) and caramelised top. The grownups’ highlight, possibly.

We stayed overnight in a decent, large cabin ($200 for four) at the Apollo Bay Holiday Park and I take a dawn run along the waterside of a town that you probably wouldn’t aim for – unless it was for La Bimba – but you don’t mind being in, either. It’s that glorious, shortlived time of day when it’s light but the birds are in charge. The fishermen are out in force here, too, and the mist hits the mountainside; the beach is long and close.

We head inland, through another mix of rainforest and farmland, to Otway Fly Treetop Adventures, which is nestled an hour from Apollo Bay and two hours from Avalon. We miss our go on the zip line tour, which swoops along eight interlinked wires overseen by Alessio and Billy, who provide detailed safety advice designed to avoid bad falls and, more prosaically, wedgies.

Instead we concentrate on the high walkway, the longest of its kind in the world, where you can watch leaves fall like butterflies with enough time to tie your shoelaces before they hit the bottom. You think the walkway, 25 metres up, is high; but then you see the spiral tower, another 20 metres up The narrow-trunked gum trees reach for the sky, home to 130 species of bird. The staff make a virtue of the rain in one of the wettest parts of the state; one sign says: “If it isn’t raining in the rainforest today, it probably will be tomorrow.” That kind of attitude will get you a long way but Otway Fly isn’t unusual in this part of the world. Plenty of the sights along the Ocean Road are making the best of what it’s got, and it’s got a lot.

Travelling around Australia? Find discount codes for local hotels by going to discountcode.theguardian.com/au