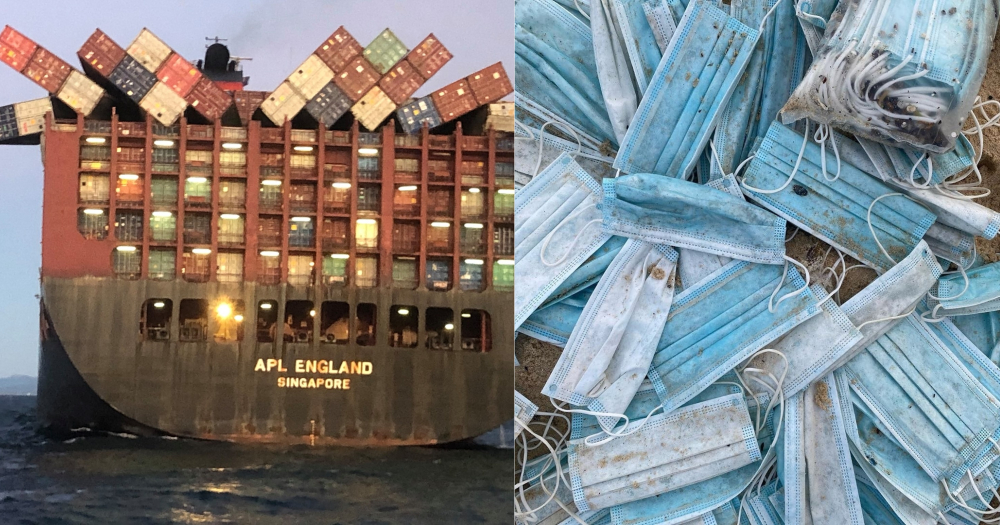 About 40 containers carrying an assortment of goods, fell off a Singapore-flagged APL England cargo ship on May 24 morning due to rough weather conditions out at sea.

As a result, some beaches in Sydney, Australia were covered in surgical masks that eventually washed ashore.

The incident happened about 73km southeast of Sydney coasts when the ship “experienced a temporary loss of propulsion during heavy seas” at around 6:10am local time, according to the Australian Maritime Safety Authority (AMSA).

The ship was en route to Melbourne from Ningbo, China.

The loss of propulsion was due to the loss of main engine power.

When that happened, the ship rolled heavily and destabilised, resulting in the collapse of some container stacks.

That led to 40 containers falling into the waters about 2km deep.

Besides the 40 containers, 74 containers were damaged.

Nine other containers were found protruding from the sides of the vessel after the incident.

After a voyage of close to 16 days from China, the cargo ship was brought to the Port of Brisbane safely for investigation.

The cargo ship will be checked if it complies with both Australian and international maritime safety standards, as well as the Australian environmental protection regulations.

The first phase of the investigation will take at least a month and the ship’s owners or parties involved might face legal action from AMSA if there is any breach in standards.

Surgical masks, plastic containers and flexible ducting used in cooling and heating systems have been found littered on beaches in Sydney subsequently.

Debris washes ashore. Masks and food containers are among the first of the contents to arrive after ~40 containers were lost from a ship (the APL England) 70km off the #Sydney coast. #marinedebris #plasticpollution #maritimespills pic.twitter.com/QitWJB8DXw

Beaches closed for clean up

Affected beaches include Bondi Beach, Coogee Beach, Tamarama Beach, and Magenta Beach that correlate to the drift modelling of debris.

More debris is expected to wash up in the next few days.

At least five containers have been washed up on beaches so far.

Some of these affected beaches have to be closed for massive clean up efforts.

Residents have been warned not to enter the waters as there are large submerged items in the drift.

Surgical face masks, plastic takeaway containers and air-conditioning ducts have washed up along the New South Wales coast, forcing popular Sydney beaches to close. 〰️ It comes after dozens of shipping containers were lost at sea. 〰️ Beaches including Clovelly, Coogee and Maroubra have closed while crews undertake a mammoth clean-up effort. 〰️ Malabar Beach is believed to be one of the worst-affected by the debris. 〰️ Items have also washed up at Bondi and at Long Bay Beach, along with Magenta Beach and The Entrance on the Central Coast. 〰️ On Sunday morning, the APL England, en route from Ningbo, China, to Melbourne, hit rough seas which caused 40 containers to fall overboard about 73 kilometres south-east of Sydney. 〰️ For more on this story and the clean-up ahead , check out to the link in our bio. 〰️ 📸: ABC News/ ABC News: Jake Lapham 〰️ #abcnews #news #malabarbeach #clovellybeach #coogeebeach #maroubrabeach #sydney #syd #bondi #longbaybeach #magentabeach #theentrance #nswcentralcoast #randwick #beaches #australia #plastic #pollution

The 10 Best Beaches in Australia